What Is a Social Construct? Common Examples Explained 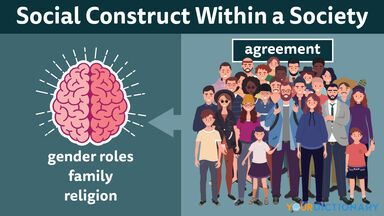 social construct with a society
Advertisement

What Is a Social Construct?

For example, the idea that pink is for girls and blue is for boys is an example of a social construct related to gender and the color of items. The collective perception that a particular color can be associated with a certain gender is not an objective representation of truth or fact. Instead, it a social convention that came to have meaning within the context of society.

Several other words and phrases can be used to mean the same thing as the phrase social construct. Synonyms for this term include things like:

Social constructs will cease to exist if people stop viewing them as valid. People who subscribe to this theory hold that reality itself is a social construct created by the people within a society.

Expand Your Understanding of Social Constructs

Expanding your understanding of social constructs involves considering which of the things you "know" actually have objective meaning versus which ones are meaningful only because people in a group assign meaning to them and continue to allow that assigned meaning to persist. Explore your perceptions vs. those of others' by reviewing some examples of sociological imagination. This will allow you to consider situations from other points of view and come to appreciate perspectives other than your own.