What Is a Tall Tale? Common Elements Explained

By the time children are finished with elementary school, they've probably heard dozens of tall tales. But what is a tall tale, and what's the difference between a tall tale and a folktale? Keep reading for the elements and several tall tale examples. 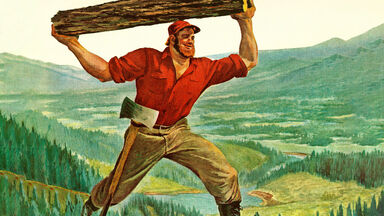 Elements of a Tall Tale

A tall tale is a type of American folktale with exaggerated characters, adventures and events. Tall tales tell the story of one amazing person and how they used their talents to save us all, similar to a legend. Some tall tales have become so ingrained in American culture that they take on a mythological role.

Tall tales can be based on a real person (such as Davy Crockett) or completely made-up (such as Paul Bunyan). Either way, the character is described in a hyperbolic way that makes them seem unbelievably heroic.

Where Did Tall Tales Begin?

The origin of tall tales, also called yarns, might be a tall tale itself! Back when 19th-century frontiersmen were traveling across America, they would engage in "bragging contests" around the fire each night. One pioneer would repeat a story they'd heard from somewhere else, and in the oral tradition, they would add and exaggerate details to make the story even more entertaining. Eventually, the stories were so well-known that children grew up hearing them long before they appeared in storybooks.

The tall tale is a distinctive part of larger-than-life American folklore. Heroes such as Paul Bunyan and Johnny Appleseed personify the American pioneer spirit and tell the story of the country's creation and growth. Films such as Big Fish (2003) also illustrate how exaggerating details can make a larger-than-life character seem unbelievable. While there are similar story traditions around the world, including fables, folktales and legends, the tall tale itself is unique to American culture.

Some tall tales got started when word of a real person's achievements got around. Their feats — and their personalities — became exaggerated with each retelling, so much so that many may even doubt whether the original person ever existed.

Other times, tall tales reflect the legends of American culture. These characters embodied the big, broad attitude of American expansionism in the 1800s.

These fictional characters from tall tales include:

Another way you might hear the phrase tall tale is as a synonym to "white lie" or"exaggeration." If you tell someone a story and embellish the details, they may decide that you're telling them a tall tale.

Some examples of everyday exaggerations that can be described as "tall tales" include:

Like tall tales themselves, these little lies have an element of truth mixed with unbelievable details. The next time someone tells you that you're telling tall tales, check to see what parts of your story might sound a bit "fishy" to you!

How Are Tall Tales Different From Other Tales?

A tall tale is an interesting type of short story. The exaggerated part of a tall tale is usually very obvious compared to the ordinary setting, unlike fairy tales or even myths.

Other types of tales that aren't exactly like tall tales include:

As American as Apple Pie

Tall tales are an important part of American folklore and literature. They reflect the change between wide frontiers and small towns, as well as what our ancestors valued most in their everyday heroes. For more about American culture, check out these famous American symbols and their brief histories.