What Was the Scientific Revolution? Key Ideas & Inventions

What was the Scientific Revolution? It is the period in history that marked the beginning of modern science. This period extended from the middle of the 16th century throughout most of the 17th century. Explore key scientific revolution inventions and discoveries. 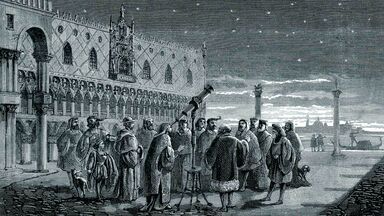 The Idea That Launched the Scientific Revolution

The scientific revolution is believed to have begun with a new understanding of the universe. Prior to the Scientific Revolution, people believed the Earth was the center of the universe. It was commonly believed that the other planets and the sun revolved around the Earth. In 1543, Polish astronomer Nicolaus Copernicus published a new theory in his book On the Revolutions of the Celestial Spheres.

With his theory of a heliocentric universe, Copernicus asserted that the sun is the universe's center, with all planets revolving around it. This assertion was based on decades of work as an astronomer. In his book, Copernicus focused first on disproving the previous theory, which is a strategy for separating sound, correct science from examples of pseudoscience. While his theory was controversial at the time, it has long-since been verified as correct.

The 1543 introduction of Copernicus' new theory of the universe is often credited with launching the Scientific Revolution, the point in history in which the way people understood the world drastically changed as fact-based scientific discoveries were made. Many advances followed over the coming century and beyond.

The scientific revolution is generally said to have taken place from 1543-1687, though not all sources agree on the exact starting and ending dates. The work done during this time continues to influence modern scientific research and thought.

New ways of thinking about the universe led to the development of many historically significant ideas and discoveries.

Science: Past, Present and Future

These early scientific ideas and inventions revealed many truths about science that empowered people to be able to understand the natural world. The groundbreaking work of the Scientific Revolution underlies what humans know about living things and the universe today. Many discoveries and advancements have been made since this time, with more to come in the future. Explore some of these advancements by discovering a few inventions from the Industrial Revolution.

The world will always need scientists to power the way to new discoveries. If you're interested in science, start building a strong foundation that just may allow you to pursue science as a career. Learn everything you can, starting with building a basic vocabulary of science terms before moving into astronomy, biology, chemistry, physics, or another area of scientific study.