When Pigs Fly and Other Funny Idioms for the Impossible

If you looked up into the sky and saw winged pigs flying around, that would certainly be a sight to behold! However, even though the saying "when pigs fly" is a common one, that's not something you'll probably ever see. This phrase is an idiom of improbability used to describe something that is never going to happen. 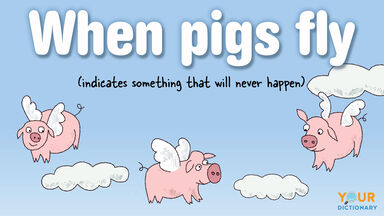 The phrase when pigs fly is a figure of speech used to indicate that something is impossible. When someone states that they intend to do something that simply cannot be done, one could respond with a literal statement to that effect. Or, one could simply respond "when pigs fly." The expression loosely means "that is not possible" or "that will not happen." As this is a common English language expression, native speakers of the language and those who are familiar with common expressions and their meanings will know what the speaker means.

The "when pigs fly" idiom is a form of adynaton, which is a type of hyperbole. The word adynaton comes from the Greek word adunaton, which means impossible. Adynaton is a figure of speech involving the use of a phrase that represents something that is impossible or highly improbable.

The use of this type of phrase is intended to convey that something is so improbable as to be considered impossible. Review a few examples of "when pigs fly" and similar phrases in sentences.

The When Pigs Fly Idiom in Dialogue

If you say something and the person you are speaking to responds with "when pigs fly," that means the individual is trying to tell you that what you're saying won't happen or that the person disbelieves what you are saying.

"When pigs fly" is just one of several idioms of improbability commonly used in English. There are plenty of creative and funny ways to let people know that what they're talking about is all but unattainable or impossible. To use another idiom, these types of phrases often refer to pipe dreams.

Now that you've explored the story behind "when pigs fly" and are aware of some other funny idioms of improbability, maybe you're interested in exploring figures of speech even further? Start by exploring some metaphor examples. Then, move on to simile examples. Soon you'll be a master of figurative language!