When Was the Renaissance? Key Facts About a Dynamic Era 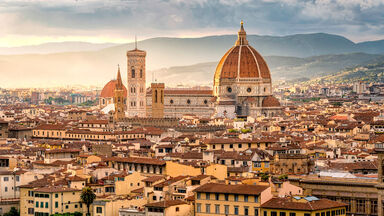 The Renaissance: When and Where

The Renaissance, also known as the Italian Renaissance, began in the 14th century and ended in the 17th century. It was a cultural and economic "rebirth" after the Middle Ages, and is considered to be the beginning of the Modern Era. The Renaissance began in Florence, Italy with scholars such as Francesco Petrach, whom historians consider the "father of the Renaissance."

The End of the Dark Ages

The Middle Ages (specifically the Early Middle Ages) are often referred to as the Dark Ages primarily because there are not as many historical records as in the era of Classical Antiquity (700 B.C. to A.D. 500). Another reason for this nickname is that the so-called "dark ages" did not produce as many powerful leaders and brilliant thinkers as the Roman Empire did beforehand. However, with its extensive historical records and endless list of cultural and political leaders, the Renaissance ended any supposed darkness during this era.

The Great Famine and the Black Death of the early 14th century had ravaged the poor classes of Europe, stagnating the economy for the middle classes. However, those in the wealthier circles of Europe — particularly Italy — found themselves with a lot of extra money after surviving the twin crises. This allowed people such as the Medicis to patronize the arts and invest in scientific advancements.

Additionally, the Renaissance brought back the classical ideas of ancient Greece and Rome, two Mediterranean cultures strongly represented in Italy. Italy was also the home to the Catholic Church and the Holy Roman Empire, whose power and wealth controlled most of Europe at the end of the Middle Ages.

The movements of the Renaissance did not stay within Italian borders, however. The political, philosophical, artistic, and scientific ideas spread to France after originating in Italy, then on to Spain, England and other areas of Western Europe. Poland, Hungary and Russia were also strongly influenced by the Renaissance, particularly its architectural design.

This spread was largely due to the invention of the printing press by Johannes Gutenburg, which could reproduce hundreds of printed pages a day. Additionally, European explorers such as Christopher Columbus and Ferdinand Magellan navigated to new worlds and spread the influence of European culture during this era.

A Period of Enlightenment

Though the Catholic Church discouraged secular movements within its spheres of influence, it could not stop the global influence of the Renaissance. But what was the Renaissance all about, and why was the Church so threatened? These are the main ideas and movements of the European Renaissance.

A Return to Classical Antiquity

Classical Antiquity was a period best defined by its leading thinkers. It was a time of flourishing political and philosophical thought that led to our modern systems of democracy, law and human existentialism. But those valuable thoughts would have been lost to history forever without their resurgence in the Renaissance.

Thanks to the printing press, the long-buried (and untranslated) works of Greek philosophers such as Plato and Socrates could be distributed to the masses. The influence of Islamic education systems and classic literature promoted university learning for the wealthy and the poor alike. For the first time in Europe, intellect was seen as important — or even more important — than a connection to God.

While in school, students would focus on humanist texts and philosophies. Humanism, which maintained the principles of a human-centered existence rather than a religion-centered life, was the driving force behind most Renaissance cultural achievements.

It began in the aftermath of the Black Death, which diminished Church control in Italy and made people consider their own humanity as they hadn't done before. Artists created works that celebrated the beauty of the human form and the untouched quality of nature. Humanists prioritized reason over religion and valued the individual experience over everything else.

The focus on the human experience had a strong effect on the religious world, perhaps most dramatically in the 16th century Protestant Reformation. While humanists were innovating the cultural space, German protestants were demanding the reformation of the Catholic Church. Martin Luther's 1517 "95 Theses" stated his protests against the abuses of the Church and promoted his belief in inner contrition rather than confession by a priest.

The document resulted in Luther's excommunication from the Church and the foundation of Lutheranism, the first Protestant religion, in Europe. Two years later in Geneva, Switzerland, John Calvin founded Calvinism, a protestant religion focused on individual morality. The Church of England came about in England in 1534 when King Henry VIII publically broke away from the Catholic Church in order to divorce his first wife, Queen Catherine. While the Catholic Church fought these movements in a Counter-Reformation, they could not undo the permanent separations between their doctrine and the Protestant humanistic philosophy.

The modern term "Renaissance man" means that a person is talented in more than one field. It reflects the multi-talented scientists, writers, philosophers, and artists of the Renaissance, who in turn were influenced by the great thinkers of the Classical era. Some of these "Renaissance Men" include:

The End of the Renaissance

The Renaissance, which focused on arts, culture and the human experience, ended with a series of political crises in the mid-16th century and into the 17th century. France's 1494 invasion of Florence led to a steady decline in its cultural influence, as did the mutinous 1527 sack of Rome by the Holy Roman Empire. The Renaissance's philosophy also suffered a major backlash when the art and literature of the time period was banned by the Church.

However, all was not lost among the intellectuals of Europe. The Age of Enlightenment would soon begin in the early 18th century. Although the thinkers of the Enlightenment favored scientific innovation and rationality over artistic expression and the classics, they were undoubtedly influenced by the spread of humanism and the individual experience during the European Renaissance.

A Pivotal Moment in History

The Renaissance falls as a middle step between the great minds of the ancient Greco-Roman world and the innovators of the Enlightenment. Without the forward-thinking movements and events of the Renaissance era, we wouldn't have our modern technology, education, communication, or industrialization. For more context on how the Renaissance fits into world history, check out these examples of historical eras.