Plants that produce grain are classified as grasses. The fruit of these plants are dry, edible berries that are often referred to as kernels or grains. These fruits can be refined or used in their whole form. A whole grain is the entire kernel of grain. Discover several examples of grains often used in whole grain form. 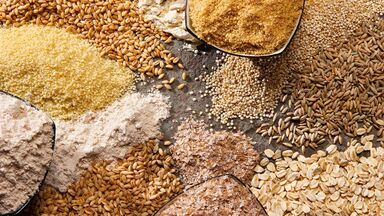 example of grains in piles on table
Advertisement

Whole grain barley includes hull-less or naked barley, but pearled barley is not whole grain. It is often used as flour, flakes or grits.

Also referred to as cracked wheat, bulgur is whole wheat that has been pre-cooked. The entire wheat grain is cooked then chopped after drying, so nothing is removed from it. Bulgur is a common ingredient in tabbouleh and other Middle Eastern recipes.

This whole grain was recently approved for human consumption in Canada and the United States. It has long been grown for bird food, as well as consumed as food or in beverages in places like the Canary Islands, Italy, North Africa, and Mexico.

The most ancient of the ancient grains, einkorn is virtually always used in its whole grain form. It has a different type of gluten than modern wheat, and so can be eaten by some people with gluten intolerance or sensitivity. It is higher in protein and other key nutrients than modern wheat.

Fonio is the smallest of all the cereal grains. It is sometimes referred to as "hungry rice." When consumed as a whole grain, it is high in fiber but has a bitter flavor. It is most commonly available as pearled fonio, which is not whole grain.

Also known as adlay millet, Job's tears grows well in many high altitude regions where it is difficult to grow corn or rice. While it is not a barley, it resembles barley and is sometimes referred to as Chinese pearl barley.

There are several types of millet, each with its own scientific/botanical name. For example, pearl millet is Pennisetum glaucum, foxtail millet is Setaria italica, and proso millet is Panicum miliaceum. All millet varieties are gluten-free. Millet comes in a variety of colors, including white, red, gray, or yellow.

The oat bran and germ are not usually removed during processing oats, so they are almost always whole grain. This includes even hull-less or naked oats.

Rice is the most easily digested grain. Whole grain rice is usually brown, but not always. It comes in a variety of beautiful colors, including black, purple or red. White rice is not whole grain rice. It starts out as bran rice but goes through a milling and polishing process to convert it to white rice.

Whole grain rye flour has high fiber content in both its bran and endosperm, leading to it having a lower glycemic index than other whole grains. It is sold in many forms, many of which are not whole grain. Rye grows well in wet and cold conditions, so it is popular in northern Europe and Russia.

Also referred to as milo, sorghum is a hardy whole grain that is naturally gluten-free. It can be popped like popcorn or used in flour form.

Also known as dinkel wheat or hulled wheat, spelt has a higher protein content than regular wheat. It has a mild flavor and can be used in most recipes that call for wheat flour. In Italy, spelt is sometimes referred to as farro grande, which translates to big farro.

Teff is a type of millet that is widely used in Ethiopia, Eritrea and other African countries. Teff grains are tiny. They're so small that they can't be milled, so all teff is whole grain.

Triticale is a relatively new grain, grown as a hybrid of durum wheat and rye. It is primarily grown in Europe and is not widely available outside of the continent. It is almost always used in whole grain form.

Durum wheat (Triticum turgidum durum) is made into pasta, while bread wheat (Triticum aestivum vulgare) is used for most other wheat foods. Both types can be used in whole grain form.

Wild rice is actually the seed of an aquatic grass rather than being a true rice. It is almost always used in its whole grain form and is typically combined with brown rice or other types of rice. It has more protein than other whole grain rice.

Because the pseudo grains are not wheat, they are naturally free from gluten. This makes them a good culinary option for people who have celiac disease or gluten sensitivity. They can also be consumed as part of a Paleo way of eating.

The fact that the name of a grain appears on a food label does not mean that the food product contains whole grain. Look for the word "whole" in front of the grain listed as the first ingredient in order to verify that a product is, in fact, a whole grain food item.

Now that you're familiar with some different types of whole grains and how to identify food products that contain whole grains, it's a great time to expand your food-related vocabulary. Explore some really unusual dishes like real foods that start with the letter "x." From there, discover a selection of foods that begin with "j."