11 Highly Specific German Words We All Need to Start Using

Thankfully for all of us, the Germans have figured out how to describe extremely specific experiences with a single word. While these untranslatable words are German, the feelings they describe are universal. Compound nouns like Schadenfreude and Wanderlust have already had their day in the English sun, and it’s time these words had their due. 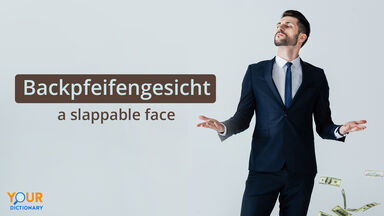 You know those particularly annoying people that could benefit from a slap in the face? Oh, come on, we’ve all thought about it. The Germans certainly have since they have a very specific word for a face begging to be slapped … or punched … or something like that. Backpfeifengesicht (back-feye-fen-geh-sisht) is made up of the words backpfeife (“to punch or slap”) and gesicht (“face”) and literally means “a slappable face.” The word alone must have been a slap in the face to whoever inspired it!

The guy who kept creeping around the bar had a real Backfeifengesicht.

Eselsbrücke (ey-sells-brew-kuh) translates to “donkey bridge” — yes, really — and means “a trick to help you remember something.” Before automobiles, donkeys were instrumental in transporting things from point A to point B. Like donkeys, our brains can be stubborn and not want to go where we intend. However, if you build yourself an Eselsbrücke, you can cross over and reach your destination in no time.

I know I need to study for the test, but I’ll cross that Eselsbrücke when I get there.

When you watch your best friend attempt (and fail) to belt out a ballad at the karaoke bar or you get to the scene in a movie where the hero fumbles when trying to ask out their crush, you experience Fremdschämen (fremd-shay-men). This all-too-relatable German word is a combination of fremd (“external” or “foreign”) and schämen (“shame” or “embarrassment”) and describes the feeling of second-hand embarrassment you feel for someone that makes you wish that teleportation (or at least invisibility) was an option so that you didn’t have to watch.

The Fremdschämen I felt when Jane tripped on the way to the alter is rivaled only by the moment they couldn’t find the rings. And to top it all off, the DJ accidentally played "Thank U, Next" during the first dance.

There’s no place like home. That’s the sentiment that the charming word Gemütlichkeit (geh-mewt-leash-kite) embodies. While it is often used synonymously with “coziness,” Gemütlichkeit is a deeper, intangible feeling of belonging somewhere and the peace of mind you experience when you’re in that location. It is the idea that you may experience at home alone in your sun-soaked living room or the joy of seeing that same room filled with children.

There’s no greater Gemütlichkeit than being at home with a book and warm cup of tea.

Germans love their pork — sometimes a little too much. When times are tough, you may find yourself reaching for that extra strip of bacon. This can result in Kummerspeck (koo-mur-shpek) — quite literally, “grief bacon.” Kummer describes emotions like grief, sadness or anxiety and speck can mean either “bacon” or “fat.” This word refers to the weight you gain because you’re feeling down and drown your sorrows in a tub of ice cream. It’s ok, we’ve all been there.

“My New Year’s resolution was to lose my Kummerspeck, but if there’s another variant I’m gonna need my Ben & Jerry’s.”

Luftschloss (looft-shloss) comprises luft (air) and schloss (castle) and can be translated as “castle in the air” or “castle in the sky.” This poetic word captures the essence of longing, an unattainable dream or a goal that will always be just out of reach. This could be a longing to light up the silver screen, an urge to create the cure for cancer, or the desire to live a happy life with a family, dog and a white picket fence.

“I always wanted to be an actress when I grew up, but I know now that that was a Luftschloss.”

Some heroes wear capes and some … wear slippers (and not the glass kind). Pantoffel (pan-toh-fehl) means “slippers” and held (hehld) is German for “hero,” so put ‘em together and you get “slipper hero!” Unfortunately, rather than a caped crusader, Pantoffelheld refers to a man who is controlled by and completely submissive to his partner. The Germans have an expression unter dem Pantoffel stehen or “to stand underneath the slippers,” which is the equivalent of “to be under the thumb.” In other words, a slipper hero is under the slippers of his partner … or maybe just lounging around the house in slippers.

While beer is often the beverage of choice for Germans, schnapps is also a favorite. Schnappsidee (schnapps-ee-day) translates to “schnapps idea” — an outlandish or foolish idea that may or may not be alcohol-induced. This can apply to any idea that sounds off-the-wall, regardless of how many drinks were or were not consumed in the process.

“I went out drinking and had a Schnappsidee for a startup that’s actually pretty brilliant. Or insane. Same difference.”

Times are crazy, times are hard and time…is running out. If you’ve ever experienced this existential crisis, fear not, because the Germans have a word for that too. Torschlusspanik (tor-shloos-pan-eek) combines the words tor (door or gate), schluss (shut) and panik (fear or panic). It generally means “fear of time running out” or “fear that a door will close.” The term actually originated during the Middle Ages in Germany when the doors to the city would close and people would rush in a panic to get inside.

“I’m consumed with Torschlusspanik because there’s just not enough time to do everything I want to do! Yes, I’m only 20, what about it?”

Treppenwitz (trep-pen-vits) combines the words treppen (“stairs”) and witz (“joke”) to make “staircase joke.” This might sound like a joke, but it’s a very relatable word with real-world applications. It refers to the times when you think of a perfect comeback or witty retort to something after you’ve left and the moment is gone. Next time you think of a response to a previous conversation while laying in bed in the middle of the night, at least you’ll have a word for it.

“He said that I was a joke, and in typical Treppenwitz fashion I didn’t think to reply ‘at least I pack a punch’ until hours later.”

Germany is famous for its fairytale-like forests. Waldeinsamkeit (vald-ayn-zahm-kite) combines wald (“forest” or “wood”) with einsamkeit (“solitude”). Its literal meaning is “solitude in the forest,” but that doesn’t do justice to the pure poetry of the language of Goethe, Schiller and Rilke. Waldeinsamkeit encapsulates the peace, pleasure and spiritual serenity that results from walking through woods and being humbled by nature. Simply, Waldeinsamkeit is more than a word, it’s a way of life.

“I disappeared into the trees and experienced Waldeinsamkeit as I strolled aimlessly through the mist.”

Words That Won’t Get Lost in Translation

Every language has a treasure trove of words and phrases that don’t get nearly enough love, and English is no exception. Consider adding these words to your vocabulary.