15 Words Literature Gifted Us (That You May Use Daily)

What do a mentor, a robot, and syphilis have in common? This isn’t the start of some kind of weird, politically incorrect joke: These are all words invented and popularized by authors. These now-common words are just a few of the words that became part of our daily speech after appearing in a famous literary work. Some come right from a book’s title, while others may surprise you. 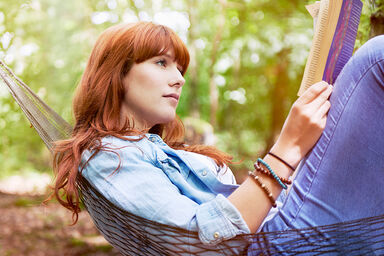 There’s no doubt that the Bard would be the first on a list of literary innovations. William Shakespeare is credited with inventing or popularizing many words and phrases that we use every day, including bedazzled from The Taming of the Shrew.

KATHERINA: Pardon, old father, my mistaking eyes,
That have been so bedazzled with the sun
That everything I look on seemeth green;
Now I perceive thou art a reverend father.
Pardon, I pray thee, for my mad mistaking.

With a Latin suffix and Latin root, bicentennial seems like it must be quite an old word. But it’s not as old as you think — in fact, Mark Twain used it for the first time in a written story in Life in the Mississippi.

New Orleans intended to fittingly celebrate, this present year, the bicentennial anniversary of this illustrious event; but when the time came, all her energies and surplus money were required in other directions, for the flood was upon the land then, making havoc and devastation everywhere.

If you’ve ever used the word catch-22 to describe a no-win situation, you’re only using it partially correctly. Coined by Joseph Heller in Catch-22, the phrase describes a paradox in which the only way out of a bad situation is to go further into it.

There was only one catch and that was Catch-22, which specified that a concern for one’s own safety in the face of dangers that were real and immediate was the process of a rational mind. Orr was crazy and could be grounded. All he had to do was ask; and as soon as he did, he would no longer be crazy and would have to fly more missions. Orr would be crazy to fly more missions and sane if he didn’t, but if he was sane he had to fly them. If he flew them he was crazy and didn’t have to; but if he didn’t want to he was sane and had to.

The “Jabberwocky” poem in Lewis Carroll’s Through the Looking-Glass is full of delightful jibberish and nonsense. But some of his invented words took hold in English, including chortle, which is a portmanteau of snort and chuckle. (Incidentally, Lewis Carroll also invented the word portmanteau.)

“And hast thou slain the Jabberwock?
Come to my arms, my beamish boy!
O frabjous day! Callooh! Callay!”
He chortled in his joy.

Have you ever needed the perfect word to describe your discombobulated surprise? You’re looking for flummox, and you have Charles Dickens and The Pickwick Papers to thank for it.

‘And my ‘pinion is, Sammy, that if your governor don’t prove a alleybi, he’ll be what the Italians call reg’larly flummoxed, and that’s all about it.

Freelance is a weird word to describe artists and writers who are paid for their services rather than through employment. In fact, it sounds slightly medieval — which is no coincidence, considering that it was coined by Sir Walter Scott in Ivanhoe to describe knights who offer their services in exchange for money.

I offered Richard the service of my Free Lances, and he refused them—I will lead them to Hull, seize on shipping, and embark for Flanders; thanks to the bustling times, a man of action will always find employment.

It’s easy to imagine that green grump staring down from Mount Crumpit when you see the word grinch. While you may be surprised to hear that Dr. Seuss was not the first writer to use grinch (that was Rudyard Kipling in “The Lament of the Border Cattle Thief”), he’s certainly responsible for popularizing the anti-Christmas mainstay in popular culture.

Every Who Down in Whoville Liked Christmas a lot ...
But the Grinch, Who lived just north of Whoville, Did NOT!
The Grinch hated Christmas! The whole Christmas season!
Now, please don't ask why. No one quite knows the reason.

There’s a demon in the middle of pandemonium, and there’s a good reason for it. In Paradise Lost, author John Milton combines the Greek pan- (“all”) with the Latin daemonium (“evil spirits”) to create Pandemonium: the place where all evil spirits reside. Now we mostly use it to describe noise and chaos, but there’s always a little demon hiding in there.

Th’ other way Satan went down
The Causey to Hell Gate; on either side
Disparted Chaos over built exclaimd,
And with rebounding surge the barrs assaild,
That scorn’d his indignation: through the Gate,
Wide open and unguarded, Satan pass’d,
And all about found desolate; for those
Appointed to sit there, had left thir charge,
Flown to the upper World; the rest were all
Farr to the inland retir’d, about the walls
Of Pandemonium, Citie and proud seate
Of Lucifer, so by allusion calld,
Of that bright Starr to Satan paragond.

A mentor is an older teacher or guide who helps you through life, and no one needed a mentor more than Odysseus (also called Ulyssess) in Homer’s The Odyssey. His mentor was the original mentor; in fact, his name was Mentor, and he was a trustworthy friend to the hero.

With these words he sat down, and Mentor, who had been a friend of Ulysses, and had been left in charge of everything with full authority over the servants, rose to speak.

Muggle refers to a “non-magical person” in J.K. Rowling’s Harry Potter and the Sorcerer’s Stone. Even though we’re all technically Muggles, the term can also indicate that a person is unversed in the Harry Potter series. But don’t worry — the term isn’t meant to be an insult (unless you’re from Slytherin).

Hagrid grunted. “I’d like ter see a great Muggle like you stop him,” he said.
“A what?” said Harry, interested.
“A Muggle,” said Hagrid. It’s what we call non-magic folk like them. An’ it’s your bad luck you grew up in a family o’ the biggest Muggles I ever laid eyes on.”

Twenty-first-century society isn’t quite as robot-rich as we thought it would be in 1921. While we do have virtual assistants and disc-shaped vacuums, Czech playwright Karel Čapek imagined a community full of robots in his play, R.U.R: Rossum’s Universal Robots. While Čapek’s work is the first to use the word robot, it’s actually his brother Josef Čapek who suggested the writer use roboti instead of labori to describe electronic people without souls.

DOMIN: No. The one that is the cheapest. The one whose requirements are the smallest. Young Rossum invented a worker with the minimum amount of requirements. He had to simplify him. He rejected everything that did not contribute directly to the progress of work. Everything that makes man more expensive. In fact he rejected man and made the Robot. My dear Miss Glory, the Robots are not people. Mechanically they are more perfect than we are; they have an enormously developed intelligence, but they have no soul.

Few phrases describe a nervous feeling so well as scaredy-cat, which first appeared in Dorothy Parker’s 1933 short story “The Waltz.” You may be more familiar with the term fraidy-cat, which is based on Parker’s original word and is just as fun to say to someone who’s as skittish as a little cat.

What can you say, when a man asks you to dance with him? I most certainly will
not dance with you, I'll see you in hell first. Why, thank you, I'd like to awfully, but I'm having labor pains. Oh, yes, do let's dance together — it's so nice to meet a man who isn't a scaredy-cat about catching my beri-beri. No. There was nothing for me to do, but say I'd adore to. Well, we might as well get it over with. All right, Cannonball, let's run out on the field. You won the toss; you can lead.

No one’s quite sure where the disease itself came from, but we can trace the origin of the word syphilis to Girolamo Fracastoro’s poem “Syphilis, or The French Disease.” His character, a shepherd named Syphilus, was punished with the painful disease after cursing the Sun God’s heat during the summer.

One day, old Sirius with his mighty flame,
During the summer solstice to us came,
Taking away the shade from all our trees,
The freshness from the meadow, coolth from breeze.
His beasts expiring, then did Syphilus
Turn to this horror of a brazen heaven,
Braving the sun’s so torrid terror even,
Gazing upon its face and speaking thus:
‘O Sun, how we endure, a slave to you!
You are a tyrant to us in this hour.

Long before Facebook used unfriend to define the act of removing someone from your feed, the word appeared in literature. And by “long before,” think 900 years before. The plural noun unfriends appeared as the Middle English onfrendes in Laymon’s 12th-century poem, Brut, where it was a synonym of enemy.

And we sollen wende; and wiþ ham fihten.
slean houre onfrendes; and wenden after Brenne.

(Translation: And we shall march, and with them fight;
Slay our unfriends, and proceed after Brennes.)

When you think of a utopia, you may think of a perfect beach or vacation spot. When Thomas More wrote Utopia in 1516, he described the land of Utopia (which comes from the Greek eutopia, meaning “a good place”) as a state with no corruption or imperfections.

Therefore, when I reflect on the wise and good constitution of the Utopians, among whom all things are so well governed and with so few laws, where virtue hath its due reward, and yet there is such an equality that every man lives in plenty … it must needs follow that, how plentiful soever a nation may be, yet a few dividing the wealth of it among themselves, the rest must fall into indigence.

Keeping Up With the Language

The English language is always evolving, and whether it’s a Middle English poet or a social media influencer, new words flock to our dictionary every year. For more additions to your daily lexicon, check out: