The Best Man Wasn't Always the Best: Wedding Terminology and Its History

When you're planning a wedding, all the words start to blur together. Why is the man getting married called a bridegroom? What does honeymoon even mean — or the word wedding itself? The origins and meanings of these common wedding words involve more evil spirits and kidnapping than one may expect. 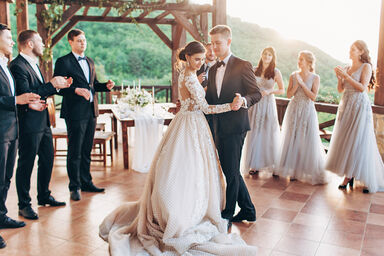 Nowadays, the best man earns his title by being the groom’s best buddy. But back in 16th century Europe, the best man had a specific duty: to keep the bride in the wedding. When a family didn’t approve of a marriage but the couple still wanted to get married, the groomsmen would engage in “marriage by capture” by kidnapping the bride from her family and taking her to the wedding. The best man was the best swordsman, who stood closest to the couple and prepared to duel any disapproving family members (or, if needed, keep the bride from running away if she’d been taken against her will). Luckily, the modern best man has a better gig. He organizes the bachelor party and holds the rings — no swordplay or kidnapping needed.

This very specific word that you’d never thought you’d need to know comes from the French bouton, meaning “button.” It describes the little flower you place in the buttonhole of a tuxedo’s lapel. While this detail may be ornamental today, men from centuries ago wore boutonnières to ward off evil spirits and keep the Renaissance-era B.O. to a minimum (the same goes for a woman’s corsage, French for “bodice”). Keep the story in mind the next time your wedding planner suggests skipping this part of your florist order.

In most cases (such as the Old English brȳd, the Dutch bruid, and the German Braut, to name a few), bride means “woman being married.” But some versions of bride translate to “daughter-in-law” and relate more to a woman’s traditional role in a family. The Old English root bru, for example, means “to cook” — just one of a newly married woman’s duties in her new household. And the Old French bride means “rein in” (think bridle, which is a coincidental homophone for bridal.) Despite its iffy origins, the modern word bride has grown into a fancy mindset and a multi-billion dollar industry.

So how does bride relate to bridegroom? This classic word for “guy getting married” comes from the Old English brȳdguma (“bride-man”). Both bridegroom and the shortened groom are derived from the Old English grome, meaning “male servant” and influenced by guma, which means “man.” Anyone marrying a bridegroom would do well to keep this definition in mind when it comes to splitting up the household chores.

It’s not difficult to figure out the meaning of bridesmaid once you know bride and bridegroom — they’re maids who wait on the bride (though your BFFs may object to the term “maid”). Their role goes back to Biblical times when the women serving the bride were their actual maids, and reflects the Roman tradition of dressing similarly to the bride in order to confuse evil spirits (or would-be kidnappers). The maid of honor had to be the most trustworthy bridesmaid because she was in charge of carrying the dowry that would change hands after the wedding. The next time your bridesmaids complain about paying for their dresses, maybe remind them that they could have it worse.

It takes about two seconds after a wedding proposal for a newly engaged couple to use the word fiancé (and about four seconds for you to get tired of it). Fiancé is a French word meaning “betrothed.” It comes from the Latin fidere (“to trust”) and describes the person you’ve promised to marry. Say it with whatever degree of French accent you’d like, but when spelling it, make sure you know the difference between fiancé and fiancée.

Today, a honeymoon is a fun post-wedding retreat to a romantic location, where a couple can begin their “happily ever after.” But like many wedding traditions, a honeymoon wasn’t always as lovely as it sounds. The after-wedding trip started as an abduction of the bride, which only ended when her father would pay up and the bride would be forced to stay in the marriage. As for the word honeymoon itself, some say that it refers to the sweetness of new love (like honey), and its waning nature (like the moon). Other traditions describe a bride drinking fermented honey, known as mead, to increase conception. Either way, we’ll take a trip to Maui instead, thanks.

You already know that the word wedding makes vendor prices jump several percentage points, but do you know what it means? It’s a pretty old word, as wed comes from the Old English verb weddian (“to vow”) and noun weddung (“act of being wed”) in the 13th century. Interestingly, the German Wette means “to wager,” which can relate to the traditional marriage dowry or the prospect of choosing one person to stay with for life. Choose wisely!

It’s a Nice Day For a Wordy Wedding

For more wedding-y words, check out: