Common Contronyms: Words That Are Their Own Opposite

The English language contains so many contradictions that some words even contradict themselves. Think about the multiple meanings of dust, for example, or oversight. How can they mean two completely different things at the same time? Words like these are called contronyms, or Janus words (for the two-faced god), and they’re more common than you think. 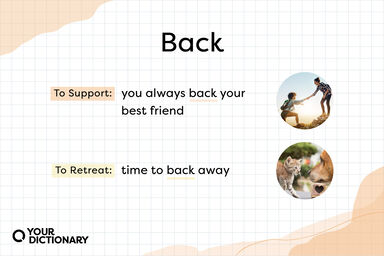 Back: To Support and To Retreat

You always back your best friend — that’s the BFF code. But what happens when they embarrass themselves in public and you’d rather not get involved? Time to back away (before you get backed into a corner).

What do newlyweds and butchers have in common? They cleave. In the newlyweds’ case, they become closer, while the butcher cleaves meat to separate it from the bone.

If you’ve ever had an article of clothing custom made for you, you know that it’s one of a kind. But when something is a custom, it means that everyone does it.

Dust: Clean, and Also Not Clean

Execute: The End and the Beginning

Seems odd that the word execute means both “end a person’s life” and “to start a plan.” Hopefully you hear it in the latter situation much more than in the former.

Fine dining, fine wine, fine arts — the word fine often accompanies something that’s the highest quality possible. And yet, if you ask a person how their day was and they say “fine,” it means they only had a “meh” type of day.

Garnish: To Add and to Remove

A garnish in your dinner is a little added ingredient, such as a sprig of rosemary or a swirl of sauce. But when your paycheck is garnished, it means the opposite — something (money) is taken away instead.

Oversight: To Fail to Notice, and to Notice Very Carefully

If you make several oversights in your work, your boss may increase their oversight of your projects. That’s because oversight can mean both “a mistake caused by overlooking a detail” and “watching very carefully.”

Refrain: Not to Do Something and To Do It Again

Anyone who’s had a strict teacher knows that refrain means “stop doing that.” But musicians know that the word refrain means “a repeated part of a song” — so it can refer to both “don’t do that” and “do that again.”

Rent: To Borrow, and Also to Lend Out

“I’m renting an apartment,” says your friend. Wait — are they staying in an apartment and paying rent money to a landlord, or are they the landlord who’s accepting money from a renter? You need more words to clarify this one (as you do with the word lease).

Resign: To Quit and Start Again

The difference between resigning from a job (quitting) and resigning with a job (signing again) depends on the prepositions you use around resign, as well as its pronunciation. Also, one ends with a paycheck and one does not.

Receiving sanctions from someone is bad — but having your behavior sanctioned is good (or sometimes bad). What? The word can mean both “a punishment for wrongdoings” and “giving permission,” which could get very confusing if you’re not paying attention when someone is yelling at you.

Screen: Both Blocking and Showing

The screen on your door blocks bugs from coming in, and you screen phone calls to block an unwanted conversation. (Or is that just a 90s thing?) But the word screen can also mean "to show," such as when your phone screen shows who’s calling, and when you screen your short film about bugs.

Strike: To Hit and To Not Hit

You could get in real trouble if you strike, or hit, someone in anger. But in baseball, where the goal of the game is to hit things, what is it called when you don’t actually hit the ball? You got it: A strike.

Weather: Worn Out and Surviving

If someone told you that your face looks weathered, you would not take it as a compliment. Weathered in that context means “old and worn out” — thanks a lot. But if someone said “you really weathered that crisis,” now it’s a compliment.

English may be complicated to learn and master, but once you’ve got the hang of it, there’s lots of opportunities for wordplay! Both beginning English learners and those who’ve spoken it since birth can enjoy: