Conversational Words Tech has Gifted Us

Technology is everywhere in the 21st century. It’s in your car, your pocket, your social life — it’s even in your vocabulary. Many tech-specific words have made their way out of the mainframe and into our daily conversations, often with non-tech meanings. 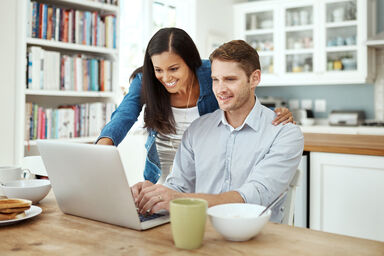 Couple using a laptop together at home
Advertisement

Missing a stop sign while driving is a signal that you’re running on autopilot. This aeronautical word, which originally referred to a mechanism that controls an aircraft’s path (and still does), can also describe that feeling of going through the motions without focusing on what you’re doing.

Your meeting schedule’s full, your project is late, and here’s your boss asking you to help him out with a client proposal. “I don’t really have the bandwidth for that,” you say. Bandwidth is the technical term for the volume of information sent over an internet connection, but in your everyday life, it means “my mental capacity for adding one more thing” (and it’s often low).

From an old-fashioned automobile to a baby stroller, all the way to describing an ungodly amount of insects outside, buggy is a great catch-all word. In technology, buggy refers to a large number of flaws in a computer program, but in the non-tech world, it can mean “not quite right” (as in “Doing math homework makes my brain all buggy.”)

When you crowdsource something, you’re asking for multiple opinions. For example, it’s a good idea to crowdsource your friends when deciding on an outfit for a job interview. Online, crowdsourcing has a slightly different meaning: It refers to creating content or projects by soliciting help from those outside the organization.

Saying “Follow me” to an attractive stranger used to be considered coming on a little strong. Where are they following you to — and what will you do when you get there? But since the invention of social media and the concept of following (adding someone’s account to your main feed), the phrase “Follow me” simply means “Let’s connect online.”

Meme is a unique word in that it started outside technology, became synonymous with technology, then came out of technology again. Derived from the Greek mimema (root of “mimic”), a meme is a unit of cultural information passed on by imitation. It was coined by Richard Dawkins in The Selfish Gene as a way for humans to spread their culture. In social media, a meme is a clever image or saying that becomes viral on the internet. But when you deem an offline moment as “memeworthy,” you’ve brought the word back around.

“Ping the team to see if they can meet this afternoon,” says your boss. In this context, ping means “connect with,” and it’s similar to the word’s technological roots (although much less specific). Ping comes from a computer’s network query to another computer or server to determine the connection between them.

You’ve probably listened to your fair share of true crime podcasts, but you may have forgotten (or never known) where the portmanteau podcast comes from. It goes way, way back to the early days of technology (2004), when we listened to these “audioblogs” on an Apple iPod. If you were too young to listen to podcasts back then, just enjoy what they’ve become now.

Spam has had a long journey into the unwanted section of your inbox. It started out as a popular canned meat that possibly means “Shoulder of Pork and Ham” and found its way into a Monty Python sketch where characters repeat “Spam” in both conversation and song. Early internet users referenced Monty Python’s use of spam when discussing annoying, repetitive messages in chat rooms. Now, spam can mean “that folder where bad emails go” and “what that irritating guy keeps saying to me.”

The term swipe left makes no sense out of context — except that the context of online dating is so pervasive that you immediately know what swipe left means anyway. Dating apps encourage users to “swipe right” if they like someone, and “swipe left” if they don’t. In real life, if you ever hear a person check someone out and mutter “Swipe left,” you know there’s been an ice-cold rejection.

That cute coat you saw in the fashion boutique isn’t trendy — it’s trending. Thanks to social media ranking topics and posts by hashtags, users can quickly travel to the most popular discussions online. The practice extends to the real world, where trending describes something that everyone is doing. (So why aren’t you?)

A troll used to be a fairy-tale creature that lived under a bridge (or an insult to someone who acted like one). Online trolls aren’t too different, except that they spend less time teasing the Billy Goats Gruff and more time picking political fights online. Offline, you can describe anyone who delights in causing chaos and unhappiness a troll, and your point will be well taken.

Feel like there are too many new words to keep straight? Add more modern words to your vernacular with: