Danish Words the English Language Hasn't Found an Equivalent To

You ever just feel a way or think a thought but have no way to express it because English is both vast and limited? The Danish might be able to give you a hand. Known as Dansk, the Danish language is full of words that you need to describe your thought cods and egg yolk feelings. 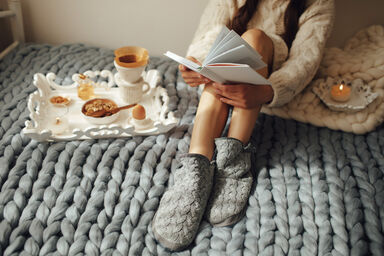 Hygge (hyoo-guh)  is one of the only words on the list that you might actually know, as it has been officially included in the English lexicon. It is most often associated with coziness and comfort.

More broadly, hygge is a state of mind defined by contentment. That predominantly gets associated with cable knit sweaters, warm lighting and enough throw blankets to blot out the sun. For you, that could mean a good book, some sunshine and your favorite sad-but-cathartic songs playing on the radio.

From bag- (meaning “backwards” or “behind”) and -stiv (literally “stiff” but slang for “drunk”), bagstiv describes waking up still feeling drunk after a night of many beers, cocktails and/or glasses of wine. Some English speakers also refer to this as “Sunday.”

Close your eyes and imagine feeling fresh and well-rested in the morning. Morgenfrisk, literally translated to “morning fresh,” refers to having a great night of sleep and waking up feeling refreshed and peaceful. The rest of us can only keep dreaming.

Literally “work joy,” arbejdsglæde (ah-bites-gleh-he) is all about loving your work conditions and your coworkers and feeling motivated to work because of that. Unsurprisingly, Denmark also consistently has one of the happiest workforces in the entire world.

Jo (yo) simply means “yes” but specifically in response to negative questions. “Didn’t you see Kate yesterday?” Jo, I did see her!

Think annoying or frustrating but to the millionth degree, and you get træls (triles), which is native to Jutland. Imagine dropping your phone in the toilet, getting a flat tire on the way to work, and consistently getting mountains of work without any respite in sight. How træls!

After træls, you may not want to do anything but crawl into bed for at least one eternity. Orke refers to having the energy or wherewithal to handle or manage a situation, but it’s most often used in the phrase “Jeg orker det simpelthen ikke,” which translates to “I simply can’t be bothered.”

Sympatisk (sim-pay-tisk) is the word for a good first impression. You met someone new and friendly, and you just feel so good about them, like you’ve just met your new best friend who you want to feel all the good feels with. That’s sympatisk.

Literally translating to “thought cod,” tanketorsk (tan-ke-to-sk) refers to an inadvertent mistake or mental error. You might think of it as a brain fart. Calling someone by the wrong name, not remembering your own mother’s name, not solving the Wheel of Fortune puzzle with all but one letter revealed. We have all been victims of tanketorsk.

Well, uh, y’know, we could, uh, all use some filler words every now and then, I guess. Altså (ell-se) is the Dansk form of that, which can mean anything from “therefore” to “indeed” to “thus,” but it can also act as an um, uh or er.

This phrase translates to “I feel like an egg yolk,” and whomst amongst us hasn’t felt the urge to turn into an egg yolk? In reality, it means feeling a sense of contentment, comfort or satisfaction.

Come for the Pastries, Stay for the Altså

Denmark is home to more than just great pastries and Hamlet, and hopefully you have a word that you can bust out the next time you feel like an egg yolk or want to brag about your great sleep. You can add even more to your personal lexicon of foreign words: