Don't Succumb to the Dark Side: Words and Phrases Star Wars Gave Us

The whoosh of a lightsaber, the eeuunnggh of a wookiee, the huww-kurr of Darth Vader’s mask — some sounds are so quintessentially Star Wars that even those who haven’t seen a single Star Wars film (yes, they do exist) can name them. Many words and phrases from the Star Wars universe are just as popular, and whether you’re fluent in six million forms of communication or not, you may find some words and phrases in your everyday speech that originated in a galaxy far, far away. 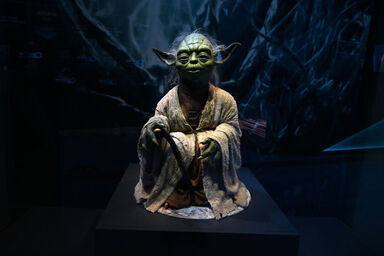 You don’t have to own Yoda pajamas to know that this famous admonition comes from the master of anastrophe himself. If someone has ever corrected your complaint of “But I tried!” with a stern “There is no try,” it’s time to go back to Dagobah.

George Lucas didn’t invent the word droid — that honor goes to Mari Wolf, author of the 1952 short story “Robots of the World! Arise!” Lucas used the shortened version of android in Star Wars: A New Hope, trademarked the term in 2008, and the rest is history.

Ever wish you could punish someone with a stare? Darth Vader had it figured out. Use the term force choke to describe that moment you want to reach across the table and strangle someone (figuratively, of course).

Princess Leia’s plea of “Help me, Obi-Wan Kenobi. You’re my only hope” is as important to the Star Wars plot as it is poetic. (Go ahead, say it slowly to yourself. It rolls right off the tongue.) Say it to an experienced colleague or mentor to guilt them into helping you out for a minute.

I Am Your Father

One of the most epic lines in movie history reveals that Darth Vader is actually (spoiler alert!) Luke Skywalker’s father. While it's often misquoted — it’s “No, I am your father,” not “Luke, I am your father” — it’s still such a well-known line that even Star Wars newbies know it by heart.

I Find Your Lack of Faith Disturbing

While Darth Vader may be one of the scariest guys in the universe, he’s no pessimist. He scoffs at Admiral Motti’s dismissal of the Force by using said Force to choke him into submission — and wryly commenting, “I find your lack of faith disturbing.” Say it to the next Debbie Downer who’s a little too glass-half-empty for your taste.

The long brown robes and strenuous training requirements make Jedi life less than appealing (even though you do get your own lightsaber). But on Planet Earth, you can be a Jedi master at pretty much anything with a little practice. From being a toilet-fixing Jedi to a grillmaster Jedi, the term has less to do with your braided hairstyle and more to do with your exceptional skills.

Have you ever made a decision without knowing why you made it? Someone may have pulled a Jedi mind trick on you — they may have used the Force to control your thoughts. It’s either that or they’re very influential (or maybe you’re just easily influenced).

May the Force Be With You

Any version of this wish for well-being, including “The Force will be with you, always” and “Use the Force” comes from pretty much every Star Wars movie. Even Han Solo, professed disbeliever in the “hokey religion,” says it to Luke in A New Hope, so feel free to call it out to your colleague as he heads into a performance review.

Turn to the Dark Side

When your friend shows up with a corporate-brand cup of coffee instead of her usual indie coffee shop brew, she may confess, “I’ve turned to the Dark Side.” She doesn’t mean “I’ve rejected the ways of the Jedi and am now an apprentice of a Sith Lord” (although that may be true as well) — she just means “I succumbed to pressure to do something I once disavowed.”

Want to praise an underling at work without sounding condescending? Try “Well done, young Padawan” with an approving nod. Even non-fans know that Padawan means “Jedi apprentice,” so your colleague will undoubtedly take it as a compliment (plus they now know you as the Jedi Knight you were always meant to be).

These Words Are Stuck on Tatooine (For Now)

While casual Star Wars fans may accept the words above as inevitable additions to a shared popular lexicon, they may draw the line at terms more suited for conventions or midnight premieres. Ease them into a Star Wars vocabulary with these words that really deserve more attention:

May the Sci-Fi Be With You

Star Wars slang is a vital cornerstone of our society, no doubt. But can man live by Star Wars alone? Expand your word-iverse with: