From Boredom to Abuzz: Words Coined by Charles Dickens We Still Use Today

When you think of massively popular celebrities, you probably don’t think of Charles Dickens. But he was a literary rock star who enjoyed an unusual amount of popularity during his lifetime by appealing to a mass readership with unique turns-of-phrase and British slang words. His work was so popular that these words (many of which he invented) made their way from slang into proper English vocabulary, and even into our modern speech and writing. 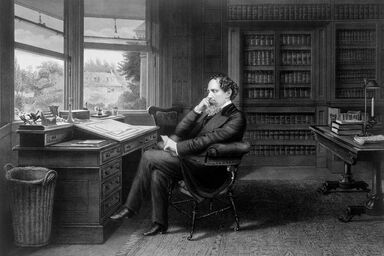 Charles Dickens in His Study
Advertisement

When a room is full of nervous energy, you can say it’s abuzz with energy. Charles Dickens paired the now-ubiquitous word with the equally excellent astir to describe a courtroom in A Tale of Two Cities.

The court was all astir and a-buzz, when the black sheep — whom many fell away from in dread—pressed him into an obscure corner among the crowd.

Where would we be without boredom (or at least the ability to describe such a feeling)? Dickens, ever-reliant on his own imagination, knew that complete uninterest was akin to a physical disorder in Bleak House.

But Volumnia the fair, being subject to the prevalent complaint of boredom and finding that disorder attacking her spirits with some virulence, ventures at length to repair to the library for change of scene.

Dickens may not have invented the crispety, crunchety treat (that’s another story), but he did invent the word butterfingers to describe extreme clumsiness. In The Pickwick Papers, he uses it as one of many insults hurled at a cricket player who’s prone to dropping the ball.

At every good stroke he expressed his satisfaction and approval of the player in a most condescending and patronising manner, which could not fail to have been highly gratifying to the party concerned; while at every bad attempt at a catch, and every failure to stop the ball, he launched his personal displeasure at the head of the devoted individual in such denunciations as — ”Ah, ah! — stupid” — “Now, butter-fingers” — “Muff” — “Humbug” — and so forth — ejaculations which seemed to establish him in the opinion of all around, as a most excellent and undeniable judge of the whole art and mystery of the noble game of cricket.

Someone with a devil-may-care attitude is carefree and easygoing (and just a little bit naughty). Dickens used the phrase in The Pickwick Papers to describe a carefree, easygoing character.

I once had the honour of being on intimate terms with a mute, who in private life, and off duty, was as comical and jocose a little fellow as ever chirped out a devil-may-care song, without a hitch in his memory, or drained off a good stiff glass without stopping for breath.

If you’ve ever felt flummoxed or bewildered in your daily life, you’ve got Dickens to thank (not for the stressful thing, but for the word flummox). He included the British slang word in The Pickwick Papers amidst other regional dialogue.

‘And my ‘pinion is, Sammy, that if your governor don’t prove a alleybi, he’ll be what the Italians call reg’larly flummoxed, and that’s all about it.

On the rampage could mean “coming after you with a weapon” or “really mad and taking it out on everyone” (or both). Dickens included this phrase seven times in Great Expectations, including the adage to live by: “On the Rampage, Pip, and off the Rampage, Pip: — such is Life!”

Whether that might be or mightn’t be, is a thing as can’t be looked into now, without putting your sister on the Rampage; and that’s a thing not to be thought of as being done intentional.

She was constantly complaining of the cold, and of its occasioning a visitation in her back which she called ‘the creeps’. At last she shed tears on that subject, and said again that she was ‘a lone lorn creetur’ and everythink went contrary with her.’

When you think of a whiz-bang idea, you’re probably thinking of a new technological innovation or a cool new life hack. That’s not unlike the phrase’s original meaning, which Dickens created by combining the two words in The Pickwick Papers to demonstrate the onomatopoeic nature of a sudden great idea.

‘Present! think I was; fired a musket — fired with an idea — rushed into wine shop—wrote it down — back again — whiz, bang — another idea — wine shop again — pen and ink — back again — cut and slash — noble time, Sir. Sportsman, sir?’ abruptly turning to Mr. Winkle.

Dickensian Words That You Need in Your Vocabulary

Not all of Dickens’ words have caught on in everyday speech — but it’s never too late to bring them back! Add these character-based words to your next group text to describe the Dickensian folks in your life.

You speak thousands of words every day. Do you know where they all came from? Chances are, they were invented by writers like Charles Dickens. Check out: