From Cannelloni to Ziti, What Your Favorite Pasta’s Name Means

You’re on a date at a fancy Italian restaurant, glancing over the menu, when the conversation hits an awkward silence. You want to choose something impressive from the menu to show that you’re worldly and interesting, but you also want to drop a well-timed piece of trivia to demonstrate your intelligence. You can do both if you know the meanings behind common — and not-so-common — varieties of pasta. 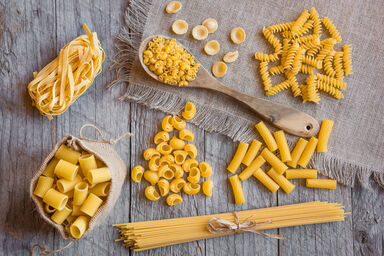 If you like your pasta with a little extra oomph (and filling), order some cannelloni. The name means “large reeds” (from the Italian word cana, meaning “reeds”), which fits the tube-shaped pasta quite well.

Does farfalle mean “bowtie?” It does not. The pasta you probably recognize as bowtie pasta is called farfalle after the Italian word for “butterfly,” which is both accurate and adorable.

The name fettuccine comes from the Italian word affettare (“to slice”), and means “little ribbons.” Those long, flat noodles really do look like ribbons, especially when they’re served with a creamy alfredo sauce.

Fusilli, a popular spring-shaped pasta, comes from the Italian word fuso, meaning “spindle” (the rod that spins fusilli into shape). It looks very similar to rotini, and is often called rotini (“twist”) in North America, but the two should not be confused on your next foodie trip to Italy.

It only takes a moment to realize that linguine (also spelled linguini) sounds like the Latin word for “tongue” — lingua, as in linguistics. Indeed, linguine means “little tongues” due to its long, flattish shape. But don't let that stop you from ordering it.

The backstory of how your favorite childhood dish got its name is a little murky (much like the water after you make a pot of macaroni). There’s general agreement that the c-shaped pasta originally came from the Greek makaria, meaning “barley broth.” From there, it may have become the Latin macerare (“to soften and soak in liquid”) and the Italian maccheroni. And that’s even before Yankee Doodle got ahold of it.

You’ve probably eaten plenty of penne without realizing how much penne sounds like pen. There’s a reason — the pasta name comes from the Latin word penna, meaning “quill” or “feather” (and later, "pen" in English). Doesn’t that bowl of spinach pesto penne look like little fluffy feathers?

A warm bowl of ravioli can feel as comforting as being wrapped in a warm blanket. Maybe that’s because ravioli comes from the Italian word riavvolgere, meaning “to wrap,” and describes the pasta’s embrace of the delicious filling it holds inside.

Also known as “wagon wheel pasta,” rotelle pasta is pretty easy to spot. It looks just like a little wheel you’d put on a tiny pasta wagon. That’s why rotelle is named after “little wheel” in Italian (ruota).

When in doubt, spaghetti it out. (It’s not a real saying yet, but we can get it started). Spaghetti means “little strings” from the Italian spago or spaghetto, which is a pretty good depiction of the popular dish. If only knowing the origins of its name made it easier to eat.

There are two possible origins to tortellini. One is that it’s short for torta (“cake”) and tortello (“little cake”), meaning that the stuffed, ring-shaped pasta looks like a tiny dessert. The other is a mythological story in which an innkeeper was spying on Zeus and Venus in the bedroom and only saw Venus’ navel, then created tortellini in honor of that beautiful belly button. The first story is more likely, but the second story is more fun.

If you’ve ever been to an authentic Italian wedding, you were probably served a ziti dish in your first course. That’s because ziti is the plural form of zito, or “a person getting married,” and means “the betrothed” or “the engaged.” It’s a lovely (and yummy) way to start married life.

Your Next Favorite Pasta

You kept your date interested with your extensive pasta knowledge, but can you really impress them by ordering spaghetti once again? Try something different — extra points if it has a name like:

Fill Up on Food Trivia

Ready for your next course? Learn more about your favorite (and new favorite) foods with: