The History Behind Nursery Rhymes You've (Probably) Never Thought About

If you have warm, fuzzy memories of dancing in a circle and singing “Here We Go ‘Round the Mulberry Bush” or “Ring Around the Rosie” in preschool, you might want to stop reading now. There’s more to your favorite nursery rhymes than you may have thought — and you may not be able to see that mulberry bush in the same way again. 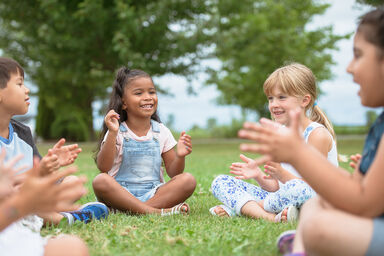 Group of children are clapping and singing together.
Advertisement

Baa, baa, black sheep,
Have you any wool?
Yes sir, yes sir,
Three bags full.
One for the master,
One for the dame,
And one for the little boy
Who lives down the lane.

At first glance, “Baa, Baa, Black Sheep” sounds like a delightful little rhyme set to the tune of “Twinkle, Twinkle Little Star” and the alphabet song. At second glance, it looks a little racist (why does it have to be a black sheep?) but most believe that’s not the case. The likely origin behind the rhyme dates back to medieval England, when King Edward I levied a wool tax, known as the Great Custom, on the English people. In some versions, there’s no wool left for the little boy who lives down the lane. Poor boy (and English peasants).

Here We Go ‘Round the Mulberry Bush

If you hum “This is the way we brush our teeth” as you brush your teeth (admit it), you’ve likely sung “Here We Go Round the Mulberry Bush” early in your childhood. It’s a great nursery rhyme that doubles as a fun dancing song and a helpful getting-ready song. And the female inmates at Victorian England’s Wakefield Prison would agree, since it possibly originated with their morning routine (including exercising around a mulberry tree, washing their face and brushing their teeth). Who’d have thought preschoolers and prisoners had so much in common?

London Bridge Is Falling Down

Everyone’s favorite part of “London Bridge Is Falling Down” is where you take the key and “lock her up." But why would you lock someone up in a bridge? The answer may lie under the surface (literally), as a medieval superstition dictated that a bridge would collapse without a human sacrifice buried at its foundation. The theory coincides nicely with the practice of immurement (punishment by live entombment) that may make you reconsider “locking her up” for a while. As for the bridge constantly “falling down”? Depending on your interpretation, it could refer to Viking attacks, the Fire of 1135, or being overloaded with British shops.

Mary, Mary, quite contrary
How does your garden grow?
With silver bells and cockleshells
And pretty maids all in a row

Silly Mary and her offbeat gardening habits! What even is a cockleshell and why does she insist on planting them? Bad news for nursery rhyme newbies — Mary may not be a gardener at all. Most people believe the poem refers to the infamous Queen Mary I, also known as Bloody Mary. The rest of the rhyme depends on your feelings about Mary, as “silver bells and cockleshells” might be symbols of a Catholic mass (ringing bells and priest’s hats), or 16th-century torture devices. “Pretty maids all in a row” might be nuns praying, or they might be lines of corpses buried … as if planted in a garden.

All around the mulberry bush
The monkey chased the weasel,
The monkey thought it all in good fun
Pop! Goes the weasel.

Up and down the City Road
In and out the Eagle
That’s the way the money goes
Pop! goes the weasel.

Don’t worry, this nursery rhyme isn’t about exploding rodents (its origin has more to do with clothing and abject poverty than animal cruelty). “Pop Goes the Weasel” is an example of Victorian cockney slang that describes pawning (“popping”) one’s coat (“weasel”) to bring home more money for their family. The phrase became a euphemism for going broke, much like “losing your shirt.” Original lyrics of the song describing spending all one’s money all over town, inevitably ending with “pop goes the weasel,” make the song an unintentional personal finance lesson for little spenders.

Ring Around the Rosie

Ring around the rosie
A pocket full of posies
Ashes, ashes
We all fall down

Any nursery rhyme that includes both “posies” and “ashes” isn’t going to end well. But since there are several versions of the rhyme without these symbols, it could represent anything from a fun dance to a grisly disease. The most common origin story is that it’s talking about the Great Plague of London (“rosie” is the rash, “poises” are the herbal treatment, “ashes” are the burned corpses, and “we all fall down” is everyone’s eventual death). If you prefer the fun version, we totally get it.

Rub-a-dub-dub,
Three men in a tub,
And who do you think they be?
The butcher, the baker,
The candlestick-maker,
All put out to sea.

What’s wrong with three BFFs hanging out in a tub together? If you’re a butcher, a baker or a candlestick maker, absolutely nothing — except the original version of “Rub-a-Dub-Dub” didn’t exactly go that way. It went “Rub-a-dub-dub/ three maids in a tub./ And who do you think were there?/ The butcher, the baker, the candlestick maker,/ and all of them going to the fair.” That’s right: Our nursery-rhyme bathers were originally just creepy looky-loos. Stick to the bath-buddy version unless you want to have an awkward conversation.

Yankee Doodle, keep it up
Yankee Doodle dandy
Mind the music and the step
and with the girls be handy!

Americans love singing “Yankee Doodle.” They love it even more than they love irony, which could be summed up with a picture of an American passionately singing a song that makes fun of the most American American ever: George Washington. The original song was written in 1775 and made fun of the American “Yankee,” but the lyrics you know today arose years later and reference George Washington’s command of the Continental Army.

After riding in on a “pony,” Washington “stuffed a feather” (plume)” in his hat and called it “macaroni” (which has nothing to do the pasta — it meant “silly-looking” or “dandy” in the 18th century.) So the next time you hear little kids singing about good ol’ Yankee Doodle, maybe steer them toward a song that mocks the Founding Fathers a little less.

What else in your everyday life has a fascinating origin story? To find out, check out: