How Is 'Dogecoin' a Real Thing? Cryptocurrency Names and Their Origins

We’ve all seen comments about “how so and so crypto saved my life” and “invest in crypto now” on our Facebook walls. That’s all well and good, but can anyone explain what a Dogecoin is? And don’t even get us started on Polkadot. Indeed, the names of cryptocurrencies can sometimes be even more confusing than the currencies themselves. One thing they all have in common is they all have interesting stories behind their names. 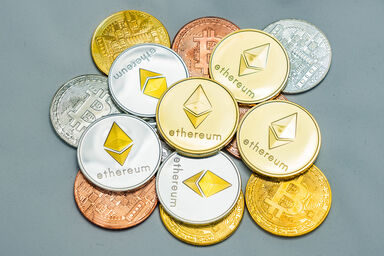 Close-Up Of Cryptocurrency On Table
Advertisement

So What Is Crypto Anyway?

If you haven’t invested in cryptocurrency and you’re still at a loss about what it is, you’re not alone. Aside from crypto bros who think they know all about the “best” cryptos, it’s still a new and often confusing concept to navigate. Simply put, cryptocurrency is a form of digital or virtual currency that uses cryptography to secure transactions. They also have no centralizing or regulating authority, which can either be a major draw or a total turnoff.

Bitcoin reigns supreme as the king of crypto, so much so that other forms of cryptocurrencies are referred to as “altcoins.” And there are a lot of altcoins — over 6,000 and counting to be exact. Due to the unregulated nature of cryptocurrencies, the creators get to name their coins, which can result in amusing and sometimes perplexing names.

Between Elon Musk’s (very frequent) tweets and the image of a perpetually confused Shiba Inu dog, you’ve like heard of — and raised eyebrows over — this meme turned popular cryptocurrency. Dogecoin (pronounced DOHJ-coin) began in 2013 as a joke between software engineers Billy Markus and Jackson Palmer to poke fun at the unpredictable nature of digital payment systems.

The name Dogecoin and the image of a Shiba Inu dog were a reference to the Doge internet meme that took the internet by storm in the early 2010s. The meme became known as “doge” because doge is a slang term for and misspelling of dog. Even before it had a multi-billionaire backing it, Dogecoin was popular among crypto enthusiasts, and since its official release in 2018, it has been widely used in online communities like Reddit and Twitter.

Dogecoin is not the only cryptocurrency represented by a Shiba Inu dog, though this good boy looks a little less “good'' than Doge’s permanently perplexed mascot. Shiba Inu was created in 2020 to be the “Dogecoin killer” by an anonymous person or group calling themselves “Ryoshi.” Also like Dogecoin, Shiba Inu is a “meme coin” based on the Doge meme.

The reigning crypto king Bitcoin has an origin story befitting a Hollywood thriller. The name Bitcoin was initially coined in 2008 in an informational document known as whitepaper by a mysterious author called Satoshi Nakamoto, which is presumed to be a pseudonym. No one knows whether Nakamoto is a person, a group of people or a shadowy interdimensional being.

Whatever the case, Nakamoto revolutionized the crypto market by creating a peer-to-peer decentralized digital cash system based on blockchain. The name Bitcoin is, quite simply, a combination of “bit” and “coin.” “Bit” refers to a colloquial term for money. Historically, a bit was worth 12 ½ cents. Thankfully, Bitcoin is worth a bit more than that.

If Bitcoin is the one crypto to rule them all, then Ethereum is the dark horse that’s been steadily gaining popularity to become the second most popular (and profitable) crypto. Ethereum was founded in 2013 by a Canadian-Russian programmer and co-founder of Bitcoin Magazine, Vitalik Buterin (no, not a pseudonym this time).

When the then-19-year-old sat down to write what would become the Ethereum white paper in 2013, he turned to science fiction terms for a name and landed on “ether,” which was a Medieval scientific theory that proposed there’s a transparent material that fills space and carries all light waves. In modern usage, ether refers to a colorless, highly flammable liquid or, in more poetic terms, the clear sky and beyond. According to financial journalist Camila Russo, who interviewed Buterin for her book The Infinite Machine:

"Vitalik wanted his platform to be the underlying and imperceptible medium for every application, just what medieval scientists thought ether was. Plus, it sounded nice."

While not the most reassuring name, Avalanche is nevertheless going strong in the crypto market. Avalanche was started in 2018 by a group of crypto enthusiasts going by “Team Rocket” who wrote a white paper to explain the complex subject titled Snowflake to Avalanche. The name was chosen in keeping with a snow theme — including consensus protocols with names like “Slush,” “Snowball” and “Snowflake” — and thankfully not a harbinger of things to come (though it certainly writes the jokes for economic pundits).

The reasoning behind the snow theme is as mysterious as the company, but the fact that it was developed at the less-than-tropical Cornell University could have something to do with it.

Cryptos can take their names from financial and scientific terms and even memes. The blockchain platform Cardano, however, chose to pay tribute to those that paved the way for digital payment systems in the first place. Cardano is named after Gerolamo Cardano, an Italian mathematician, physicist, scientist, and all-around Renaissance man (literally).

The cryptocurrency itself — ADA — is named after Ada Byron Lovelace. Lovelace was a mathematician who revolutionized the computer industry more than a century before it was cool by writing the first-ever computer program for a machine called the Analytical Engine. Talk about being ahead of your time! The currency’s subunit is called the Lovelace, and one Ada = 1,000,000 Lovelaces.

Though it may sound like the theme for a spring dress collection, Polkadot is a relatively new and thriving open-source, blockchain cryptocurrency. It was adapted by the Ethereum co-founder Gavin Wood using the protocol Blind Assignment for Blockchain Extension or, more simply, BABE. The reasoning behind the innocuous-sounding Polkadot (other than being adorable) may be that the circles represent the pattern of blockchains.

Invest in learning by checking out the origins behind your favorite brands and more.