How These Car Parts Got Their Weird Names (Spoiler Alert: Horses Are Involved)

You already know that brakes make a car stop and a steering wheel directs it where to go. You could probably even decipher that a muffler muffles the loud sounds emanating from a car engine. But do you know why your instrument panel is called a dashboard, or why a tire is a tire? It may seem like the names of car parts are random, but they all have an origin story — and it starts with a horse and a carriage. 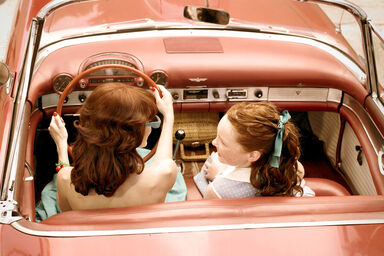 The dashboard on your Tesla can do lots of things, but can it protect you from mud? Its 19th-century forefather certainly could. Back then, as a horse-driven carriage traveled along a muddy road, horses would kick up rocks and splash (or “dash”) mud onto the unprotected carriage passengers. It didn’t take long for drivers to install a board between the horses and the humans, known as a “dash-board,” to serve the same purpose as a modern-day windshield or mud flap.

This one is just one of those morbid idioms, right? Sadly, no. There’s a reason why the space between the tire and wheel well of a car is called the dead cat hole: Stray cats often sleep in this little space that is still radiating heat from the car’s engine. However, if the cat’s not too quick to awaken at the sound of the ignition … well, you get the picture.

Car registration, extra sunglasses, tissues, maybe a snack or two — you probably keep everything in your glove compartment except gloves. But the original glove compartment, which was a box stored on the floorboard of early automobiles, was designed to store driving gloves, because what uncultured monster would drive a car with their bare hands? The glove compartment moved from the floorboards to just below the dashboard, and the rest is (cluttered) history.

Don’t mix up a grill and a grille. One is for making delicious burgers and steaks, and the other keeps your engine cool by ventilating cool air through it. They both come from the Latin craticula (“gridiron”), but the meaning of grille has narrowed to only mean “an ornamental grating at the front of a car.” Alas, until the automobile industry figures out how to safely install a barbeque grill in your car, the grille in the front is the only one you’ll get.

“Pop the hood” is such a common automotive saying that we don’t even think about how weird it sounds. It sounds even weirder in the U.K., where the covering over a car engine is called a bonnet, not a hood. But no matter what you call that big slab of metal, it’s derived from older cars and their curved hoods’ resemblance to a head covering. Modern car hoods are flatter, making the resemblance harder to see (unless your sweatshirt also has a wide, flat hood on it).

Hubcaps are those fancy-looking disks that keep your wheels from looking like they’re about to fall off. While they’re mostly decorative today, they used to serve an integral purpose on carriage wheels. Hubcaps (also called dust covers) covered the center hub of these wooden wheels, keeping them on their axles. Back then, a missing hubcap meant disaster; today, it’s mainly a traffic faux pas.

Car aficionados know this one, but for everyone else, the rocker panel is not an intuitive part of the car. Which part rocks? Doesn’t all of it rock? Like many other parts of a car, this one comes from old-timey carriages, specifically that part below the door and between the wheel wells that looked kind of empty behind a horse. Carriage designers added a rocker panel (think of that curved wooden plank that makes a rocking chair or rocking horse rock) to provide structural reinforcement and deflect rocks. And, of course, to look cute.

Spoiler alert! (Say that the next time you see a car with a big rear spoiler; ignore the pun-haters in the car.) The metal contraptions in the back of a car aren’t just for show, and they aren’t for ruining the plot of your favorite show, either — they’re for reducing wind resistance around the car, also known as “spoiling” the airflow.

Have you ever taken a moment to wonder why those big rubber things attached to your car wheels are called tires? Is it because they’re constantly moving and always get tired? Nope — tire is short for attire, meaning “a dressed wheel.” Original tires used to be iron plates that covered a carriage wheel. In fact, that’s where the term “tire iron” comes from. In this usage, they were known as tyres (and still are in England) until rubber tires were invented for bicycles in the late 19th century.

Last but not least is the most underappreciated part of your car: the trunk. So named because it used to be a literal traveling trunk strapped to the back of an early automobile, the trunk became an installed part of the car in the 1930s. But perhaps even more interesting is the origin of the British term for trunk, which is boot. In horse-drawn carriages, the coachman’s seat (known as the “boot box,” as it often stored boots) was in the back. “Boot box” became “boot,” and thus, two very different words for the exact same thing were born.

More Mysteriously Named Items You Use Every Day

If you’re ready to get out of the car, check out these explanations for the everyday things in your life you’ve never given a second thought about (but will now):