Irish Proverbs That Are Just Trying to Help, Really

When it comes to well wishes and life blessings, no one beats the Irish for turn of phrase. Popular Irish blessings and proverbs, such as “May the road rise up to meet you,” are sure to put a smile on anyone’s face. But what about the phrases that are a little darker — especially those ones about the Devil and the gallows? Believe it or not, those proverbs are as well-intentioned (and quintessentially Irish) as a rainbow kissing the Blarney Stone. 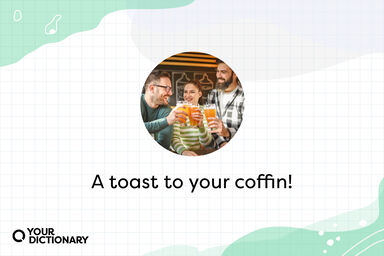 Friends In The Pub Toasting With Irish Proverb
Advertisement

A Toast To Your Coffin

If someone called out “A toast to your coffin!” over the noise of a pub, you’d probably consider it a death threat. But if you’re in Ireland, that toast is likely to come before the next lines: “May it be made of 100-year-old oak. And may we plant the tree together tomorrow!” He doesn’t want you to die at all — at least, not for a long time.

Most cultures have a proverb that means “Mind your business.” But saying “don’t break your shin on a stool that’s not in your way” is a wonderfully specific and slightly violent way to remind Irish children not to be nosy.

He Didn’t Lick It Off a Stone

“Where’d he learn that?” one parent asks, watching her child shout at her friend. “He didn’t lick it off a stone,” mutters another parent. It means “they learned it somewhere,” and is a somewhat gross way to blame you for someone’s learned behavior.

Here’s To a Quick Death and an Easy One

Here’s to the Health of Your Enemies’ Enemies

Why would you toast to someone’s enemies? That sounds a bit hostile — and incorrect. This dark-sounding Irish phrase means “I hope bad things happen to your enemies” and is much nicer than it seems at first glance.

If It’s Drowning You’re After, Don’t Torment Yourself With Shallow Water

You don’t often find drowning advice in a proverb. However, this Irish phrase isn’t encouraging listeners to actually find deeper water to drown themselves in; it’s saying “Anything worth doing is worth doing well.” So don’t drown yourself — just wash the dishes better next time.

If You Dig a Grave for Others, You Might Fall Into It Yourself

Slightly more morbid than “the pot calling the kettle black,” this proverb cautions listeners not to plot against another person when we may be guilty of the same thing. It creates a Beckett-worthy mental image of a graveyard that should give you enough pause to rethink your (probably bad) idea for revenge.

It’s Not a Delay to Stop and Sharpen the Scythe

Unless you grew up on a farm, a proverb including the word scythe is likely to conjure images of the Grim Reaper. But this expression means “doing things right isn’t a waste of time” and is surprisingly helpful advice to anyone listening (including the Grim Reaper, if he’s concerned about taking too much time when harvesting souls).

Forget critical thinking for a second. At first glance, this expression sounds like one can break their own nose with their mouth, which is both horrifying and sort of intriguing. (The alternate version, “It is often that a person’s tongue cuts his throat” is equally so.) But it just means “what you say will get you in trouble” and is 100% true.

The first part of this blessing sounds lovely — who wouldn’t want to be constantly protected by God? It’s not until you get to the “close his first too tight” and possible crushing-by-deity that it sounds a little problematic. It’s not, though; like many Irish sayings, it means “I hope you have an easy life.”

May the Roof Above Us Never Fall In

You probably never even thought about the roof above you falling in until you heard this expression. Sure, the speaker hopes the roof doesn’t fall in, but why bring it up at all? It’s meant to precede the next line: “And may the friends gathered below it never fall out.” A clever way to express a sweet statement.

May Misfortune Follow You the Rest of Your Life

Another example of listening to the whole blessing before you panic is this popular Irish saying, which sounds a lot like a curse unless you finish it up with “and never catch up.” Another wish for an easy, pain-free life.

Many Irish blessings have a wink toward the listener’s naughty nature. This one’s well-known for its acknowledgement of misdeeds and desire to have one outrun their consequences, as well as tricking the Devil (always a plus).

Excellent Expressions From Around the World

While the Irish have some inspired ways to wish you well, they’re not the only ones with fascinating proverbs and idioms. For more colloquialisms from other countries, check out: