It's Not 'Lit' Literally, Right? Your Quick Guide to Gen Z Slang

How do you do, fellow kids? It may be straight fire to spill the tea, but no cap — it’s a big yikes, bet. If any of that made sense to you, you were either born after 1997 or you’re a millennial who’s trying to pass as younger than you really are. Either way, there are easy ways to master AAVE-inspired Gen Z slang, both for legit fam and for us cheugy kids born a little earlier in the 1900s. 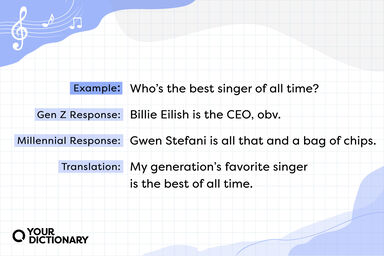 Bet is a nice starting point for millennials because it comes from “you bet,” a phrase they likely know from wholesome 90s sitcoms. It means “you better believe it” or “I agree” and can be used at the end of a sentence as an interjection (“I love Full House, bet”) or as an affirmative response to a question (“Do you love Full House?” “Bet”).

When someone really embarrasses themselves either IRL or online, that’s a big yikes. You can say it to the humiliated person in sympathy, or you can whisper it to someone who also saw it, but you just hope it never happens to you.

It seems like only yesterday that bougie was an insult for someone who was acting a little too fancy than their surroundings. And that’s still the case; you don’t want to be bougie. However, boujee isn’t an insult — it’s a way to celebrate one’s newfound wealth that they totally deserve.

A CEO Is the GOAT

How is Tom Brady a quarterback and a CEO? The popular TikTok term CEO refers to someone who is the best at something (it doesn’t really matter what that thing is; you can be the CEO of being late to class). Another popular term for a CEO is the G.O.A.T — Greatest of All Time — although that’s really high praise reserved for people like, well, Tom Brady.

Be careful how you use Gen Z slang if you’re from an older generation. The last thing you want to be is cheugy, which means “lame and trying too hard.” While not every generation has had this word, they’ve all had the condescending eye roll that usually goes with it.

Typically, if someone describes themselves as dead, that’s not good. But like many societal concepts, Gen Z has subverted the word dead, and it now means “I’m laughing really hard, now I’m dead because I’ve laughed so hard” (also helpfully condensed to a skull emoji).

You don’t have to be family to be fam. The inclusive nature of Gen Z makes fam a term of endearment for one’s friends, online followers, coffee shop customers, people on the street … pretty much anyone who shares your beliefs or physical space can be fam.

Younger millennials may remember lit as meaning “drunk or under the influence.” Like many elements of the 21st century, the word has stretched its boundaries and now typically means “that’s cool” or “that’s great.”

Cap or No Cap?

All generations strive for truth and authenticity, and when they don’t get it, they have very specialized language to figure out what’s up. Say cap to accuse someone of lying (although fair warning, they may respond with no cap, meaning “I’m not lying,” so then you’ll be right back where you started).

It Slaps (But Doesn’t Hurt)

When someone tells you that a new song really slaps, it doesn’t mean that they’re hurt by it. Songs that slap have great beats and meaningful lyrics and end up on more than one of your Spotify playlists. Songs that only kinda slap are still awesome, but you might be embarrassed to admit it.

Spilling the Tea Could Actually Be Good

Spilling the tea feels amazing, and once you do it, you can’t wait for your next chance. Not actual tea — that will burn you. Spilling the tea means “telling secrets or spreading gossip,” and the only person who enjoys it more than the gossiper is the listener.

Straight fire is another one of those Gen Z terms that sound painful but is actually great. It means “very hot” or “very good” and is one of the highest compliments available in a young person’s lexicon.

Stan: Blast From Millennial Past

Stan is a portmanteau of stalker and fan, and it means “to avidly support something, almost to the point of obsession.” Based on the 2000 Eminem song of the same name, stan has been around for longer than most of Gen Z has been alive but was only added to the dictionary in 2017. No cap.

Your Vocabulary Is a Little Sus

You can probably figure out that sus is short for suspicious, but are you sus when you see crumbs on your kitchen counter and wonder if your roommate ate your last cookie? Or is he sus for doing it? It’s the latter — so feel free to narrow your eyes at all those sus people in your life.

Don’t Yeet Your Dictionary Yet

Yeet means both “throw” and “great,” and according to Gen Z, it can mean all sorts of other things (most of which involve velocity of some kind). As long as you use it as a verb or exclamation, you won’t appear hopelessly uncool, unless you call something “really yeet.” Just don’t.

Once you’re completely sure what sus and cheugy mean, try bringing these golden oldies to your group text: