“Just let dead dogs sleep!” you yell, slamming the door as the perfect end to your perfect comeback. But just as that door swings shut, you wonder “Was that the right way to say it?” Nope, it’s definitely not the right way to say it. You’ve mixed up “let sleeping dogs lie” and “beating a dead horse,” and now your perfect comeback is a messy malaphor — also known as a mixed metaphor or proverb. Oops. 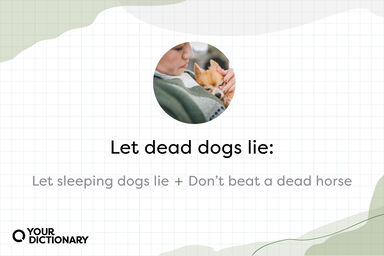 Bat In Your Bonnet

Another malaphor, “bat in your bonnet,” sounds terrifying. Much more than, say, a bee — which is the actual idiom. When you have a “bee in your bonnet,” you’re upset about something. The bat comes from “bats in the belfry,” which means a person behaves in an odd or eccentric way.

Don’t Bite Off the Hand That Feeds You

Another malaphor that sounds more violent than it should, this one involves two different biting-themed adages. “Don’t bite off more than you can chew” warns listeners not to take on more work than they can handle, while “Don’t bite the hand that feeds you” is a cautionary tale about insulting a person who’s trying to help you.

Don’t Count Your Blessings Before They Hatch

Unless blessing is another word for chicken (which it’s not), this malaphor is a bit confusing. It mixes up “Don’t count your chickens before they hatch,” which tells people not to count on a good thing until it’s certain, with “count your blessings” — an advisory to be grateful for what you already have.

Hit the Nail Right on the Nose

Does a nail even have a nose? It does not — it has a head, which is why the saying “You hit the nail on the head” means “you’re absolutely right.” The nose comes from the similar-meaning “On the nose.” Another version of this malaphor is “Hit the nail right on the money” which includes another phrase that means precisely: "right on the money."

I Can Read You Like the Back of My Hand

One of the most common malaphors mixes up two sarcastic idioms into one confusing mishmash. “It’s not rocket science” is a condescending way to tell someone that a task isn’t difficult, as is “It’s not brain surgery.” Make sure you get your insults straight beforehand.

Killing Two Birds in the Bush

Everyone knows that “One bird in the hand is worth two in the bush,” meaning that a sure thing is preferable to a possibility. “Killing two birds with one stone” is also a good thing (not for the birds), since it means you can accomplish two tasks with one effort. But all these sayings have in common is birds and their potential harm.

Mad as a Chicken With Its Head Cut Off

If you had your head cut off, you’d likely be pretty mad — if you weren’t also pretty dead. You may “run around like a chicken with its head cut off,” which means you’re running around without purpose or reason, or you can be “as mad as a wet hen.” But even chickens can’t express emotions without heads.

No Skin Off My Teeth

Assuring someone that you are unbothered by a task by saying “It’s no skin off my teeth” is bound to get you a funny look. This malaphor combined two sayings with unpleasant images: “No skin off my nose,” and “by the skin of my teeth,” which describes a narrow escape. Neither of them make a lot of sense out of context anyway, let alone as a mixed metaphor.

One Man’s Day Is Another Man’s Dollar

Some malaphors sound so correct that it’s hard to fix them. By combining “One man’s trash is another man’s treasure” (what’s not valuable to someone may be quite valuable to someone else) and “Another day, another dollar” (today was tedious but at least there’s a small benefit), you get a mixed metaphor that sounds almost good enough to pass.

Robbing Peter to Pay the Piper

When it’s time to receive consequences for an action, it’s “time to pay the piper.” So how do you pay him? Not by robbing Peter — you “rob Peter to pay Paul,” meaning that you take one debt just to fulfill another. The piper’s going to have to find his money elsewhere.

The Pink Elephant in the Room

The Road to Hell Is Greener on the Other Side

While this malaphor evokes a pleasant image of Satan mowing a well-manicured lawn, it’s not a real saying. It confuses “The road to Hell is paved with good intentions,” meaning that people who don’t act on their nice thoughts cause more harm than good, and “The grass is greener on the other side,” which means that other situations always look better than your own.

That Ship Has Left the Station

Ships can sail away, and trains can leave the station. Both symbolize the act of moving on — which is why the malaphor mixes up “The train has left the station” and “That ship has sailed.” The slightly less popular (but possibly funnier) version of the malaphor is “That train has sailed,” popularized by the immortal Austin Powers.

We’ll Burn That Bridge When We Come to It

Why would you approach a bridge just to burn it? It doesn’t make sense, and neither does combining “We’ll cross that bridge when we come to it” (we’ll solve that problem as it arises) and “Don’t burn your bridges behind you” (don’t destroy relationships; you may need to return to them).

You Can Lead a Gift Horse to Water

Hey, you got a gift horse! Why won’t it drink? Because “you can lead a horse to water, but you can’t make it drink,” meaning that you can inspire someone to do something but you can’t force them to do it. The gift part comes from another saying, “Don’t look a gift horse in the mouth,” which means you shouldn’t criticize a generous gesture.

An Idiom By Any Other Name

Idioms are, arguably, the best part of any language. Now that you’ve got your English idioms straight, check out: