We all know calling someone “stupid” or an “idiot” is rude and demeaning, but that doesn’t change our frustration when we’re faced with someone who says something that makes our eyes roll to the back of our heads. You might get creative with your insults, but few drive the point home quite like the classic beef-witted. 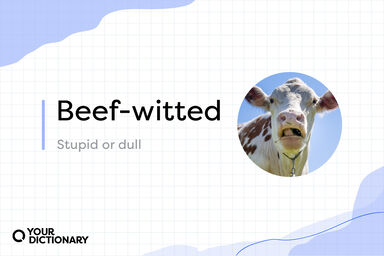 The old zinger beef-witted is what you call someone or something that is stupid or dull without saying a word that would have landed you in the corner in kindergarten. It is used like the familiar “dim-witted” or “dull-witted,” but beef-witted is just a more rare and well-done insult all around.

Beef With the Bard

We have the bard himself to thank for over 1,700 words in the English language, and beef-witted is one of the best. In William Shakespeare's play Troilus and Cressida, Thersites says to Ajax:

The plague of Greece upon thee, thou mongrel beef-witted lord!

The dialogue that follows drives home the point that Thersites is calling Ajax a fool. In Shakespeare’s time, this new word would have been understood by the audience to mean “having the intelligence of a cow.”

How To Call Out the Beef-Witted in Your Life

Whether it’s an unprepared colleague or that person who cut you off in traffic this morning, there’s always that beef-witted person who just doesn’t get it. If you’re at a loss for ways to call out these beef-witted people, try using the noun form beef-wit. You can also pair beef-witted or beef-wit with another insult. For example, Shakespeare combined beef-witted with mongrel.

You might want to keep beef-witted in your arsenal for when you’re faced with any of the following:

While it can be tempting to call someone beef-witted, especially if they've done something rude or harmful, it’s important to remember that they’re another person who’s just living their life. Think twice before you call someone a beef-wit to their face because you could really hurt their feelings and you’re not doing yourself any favors either.

There’s no reason to let perfectly good words go to waste. Check out a few words we’ve deemed worthy of a comeback.