When you're really trying to cut someone down with a good insult, you need a word that sums up both their utter worthlessness and inability to improve. Put simply: you need the word bootless. 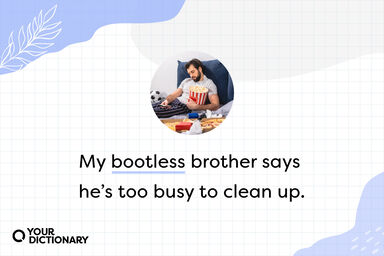 Man asleep in a messy room as example of Bootless
Advertisement

Bootless: A Useful Word for Uselessness

Calling someone bootless has nothing to do with their footwear. In fact, boot and bootless come from totally different languages: Boot is derived from the Old French bote (“covering for the lower leg”) and bootless comes from the Old English botleas (“unpardonable”), describing a person who is totally ineffectual and useless. Think of that guy who peaked in high school and now spends his time pretending to work at a prestigious company and spreading disinformation on the internet. That guy is bootless.

Besides tearing people down, you can also use bootless when someone is:

You’ll be able to bring bootless into the 21st century sooner than you think. The next time a telemarketer calls during dinner or someone texts you “ok” (or God forbid, “k”) instead of a real answer, replace the curse word that came to mind with bootless. It’s a good word choice habit and it’s safe for work!

Using bootless in your everyday speech puts you in excellent literary company. William Shakespeare, who never shied away from hurting one’s feelings with very specific wordplay, used both the figurative meaning (“demoralized”) and literal meaning (“without boots”) in Henry IV:

Three times hath Henry Bolingbroke made head
Against my power; thrice from the banks of Wye
And sandy-bottom'd Severn have I sent
Him bootless home and weather-beaten back.
- Act I, Scene 1

If you want to get really dark, the English translation of Homer’s Iliad uses bootless several times to depict a dire or hopeless scenario, as in the case of the despairing Achilles:

I stay here by my ships a bootless burden upon the earth, I, who in fight have no peer among the Achaeans, though in council there are better than I.
- Book XVIII

Follow Charles Dickens’ lead in A Tale of Two Cities if you want to use bootless instead of fruitless:

“Well!” said that good-natured emissary, after a full half-hour of bootless attempts to bring him round to the question. “I have been to Soho.”

So you’d like to drop bootless into casual conversation, but you’re concerned about being judged by your less eloquent (or, shall we say, bootless) friends. It’s not as big a deal as you think — if you’ve ever added “to boot” after a list of items, reasons or attributes, you’re using a version of bootless already.

Both bootless and “to boot” come from the Old English noun bot (meaning “advantage”). When you say “The new neighbor is attractive, funny, smart, and a great gardener to boot,” you’re adding that last part as another advantage to having a hot new neighbor. Bootless refers to the lack of an advantage, hence the -less at the end. (Hopefully, the neighbor on your other side isn’t bootless.)

Other Words That Sound Less Insulting Than They Really Are

Whether you’re describing an existential crisis or your kiss-up colleague who doesn’t do any real work, bootless is just a great word to have around. But it’s not the only archaic or rare word whose meaning is harsher than it seems.

By including bootless in your vocabulary, you’ve actually stopped yourself from becoming bootless! But the journey doesn’t end there — add these additional words to your list to become a word wizard: