There are many ways to describe that guy who gets to the bottom of his beer a little more quickly than everyone else. But rather than labeling him a drunk or a lush, you can use a more refined and specific word for his intemperate behavior: crapulous. 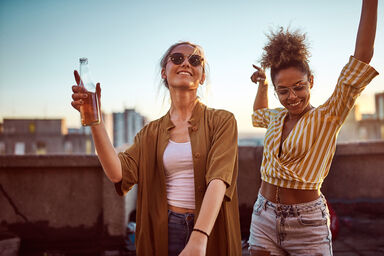 Two women dancing and drinking alcohol at the party
Advertisement

Crapulous: Latin For ‘One Too Many’

All right, so crapulous doesn’t exactly scream “refined,” but it’s a great word regardless. It comes from the Latin crapulosus, meaning “excessive intoxication” and describes a person who goes too far with the alcohol from time to time (or more). Crapulous can also describe the aftermath of heavy drinking, as the Greek kraipalē means “hangover.” Basically, crapulous can describe your entire night of debauchery, up to — and including — your night on the bathroom floor.

How To Use Crapulous in the 21st Century

Unless you’re writing a novel set a few centuries ago, crapulous may feel a bit antiquated for everyday conversation. But don’t let its age deter you from bringing it back to this millennium. There are lots of ways you can use crapulous in this day and age, including:

You wouldn’t be the first person to notice that crapulous sounds like, well, crap. But the words don’t have the same origin or meaning. Crap, meaning “defecation,” comes from the Middle English crappe, French crappa (“residue or dregs”) and Dutch krappen (“to pluck or cut off”). Its potty-talk and light-curse-word meanings became popular centuries later, long after crapulous partygoers were wobbling their way home.

If you’re wondering whether it should be crapulent instead of crapulous, you’ve got a point (and an admirable vocabulary). Both adjectives relate to the noun crapulence, which is the state of drunkenness and can be used interchangeably to mock and probably confuse the crapulous among us.

If crapulous isn’t your style, try out these Old English and Middle English archaic words that still hold up:

One More For the Road

Whether you enjoy the occasional crapulence or you’d prefer an iced tea, there’s always room for new words on the menu. Order up another round of enhanced vocabulary with: