Let's Bring Back 'Gorgonize' and Make It the New 'Terrify'

You’re driving down the street when another car cuts right in front of you, making you slam on your brakes. Besides cursing at your dashboard, what can you do to this traffic transgressor? Flashing a middle finger is satisfying but déclassé, and road rage only makes matters worse. What you need is a word for that deadly look you flash as you pass that lane-jumping jerk: You need to gorgonize them. 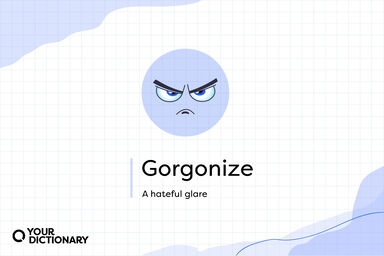 Medusa and Her Snaky Side-Eye

Fans of Greek mythology and/or Percy Jackson may infer that gorgonize refers to Medusa, a Gorgon with snakes for hair and a petrifying stare — literally, as anyone who looked upon her found themselves turned to stone. In today’s less mythological world, gorgonize refers to a hateful glare that may be less literally petrifying (but terrifying nonetheless).

Eventually, the hero Perseus came around and beheaded Medusa, but even her decapitated head was powerful enough to turn unsuspecting onlookers into statues. Now that’s the type of side-eye they should teach in driver’s education.

There’s not much in the mythology books about how Medusa felt when she turned someone to stone, but if it were you and people kept coming to your cave in hopes of cutting off your head (rude), it would probably feel pretty good to stop them in their tracks.

You can follow in the evil-eye O.G.’s footsteps by gorgonizing these 21st-century offenders:

Medusa would turn these walking pet peeves into statues before they could bat an eyelash. But you don’t need that misunderstood monster to get your point across — just narrow your eyes and channel all your fury into the space between them. If they get a shiver down their spine, congratulations! You’re an honorary Gorgon who gorgonizes with the rest of them.

How to Describe a Gorgonizing Victim

Some days you’re the Gorgon, and other days you’re the lifeless lump of rock in her path. When someone levies that stone-making stare in your direction, you can use these excellent words to describe how you feel:

But a gorgonizer doesn’t have to have snakes in her hair in order to freeze the blood in your veins. Anything from an unexpected bill to an unusually large spider can gorgonize you, leaving you recreant and tremulous in your tracks. (See how much better that sounds than “scare the pants off you”?)

Greek gods and monsters don’t own the rights to cool vocabulary words. For more Greek mythology terms to reintroduce into your texting lingo, try out: