Let's Bring Back 'Poltroon' and Give Cowards a New Name

Cowboys really knew how to hurt each other’s feelings. They had so many great ways to call each other a coward — many of which involved their livers, their spines or their mothers — that it may seem like we just can’t compete in the 21st century. Luckily, we don’t have to: We have the word poltroon. 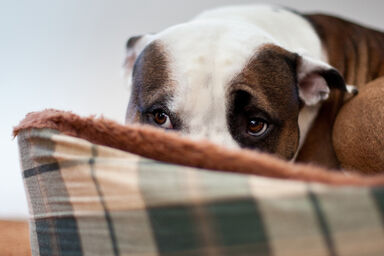 The word poltroon, meaning “total coward,” comes from the Old Italian poltro (meaning “couch”) and poltrone (meaning “sluggard”). Imagine the scarediest cat you know huddled on their couch, and you’ve got yourself a poltroon.

Unlike the people it describes, poltroon is a helpful word. It functions as a noun when it’s a mean name to call someone or as a description of one’s general cowardice (“Curse your poltroonery” or “That was an unbelievable act of poltroonery”). Want to use it as an adjective? Go with poltroonish (“I can’t stand your poltroonish attitude”) and it will never leave your vocabulary.

What makes someone a true poltroon? If they’re doing any of these in their daily lives, feel free to throw the P-word at them

Don’t Be Afraid to Bring Poltroon Back

If you know someone who fits the description, consider bringing poltroon back by:

Love the idea of calling people names but aren’t sold on poltroon? Don’t worry — there are lots of ways to insult someone’s bravery (or lack thereof) with vocabulary. Try out:

Don’t Be a Language Poltroon

Once you’ve brought back poltroon, the rest of your vocabulary will need a lift as well. Add these words to your everyday conversation: