Let's Bring Back 'Sciolist' and Make Pretentiousness Even More Embarrassing

Your boss who always corrects you; online commenters who lead with “Actually”; that guy at the supermarket who reminded you that you shouldn’t end your sentence with a preposition — chances are, you know a lot of pompous blowhards. They’re pretentious and annoying (and in the case of the grocery store guy, wrong), but you have to deal with them anyway. So why not insult them by using sciolist, a word they likely don’t know, to add insult to injury? 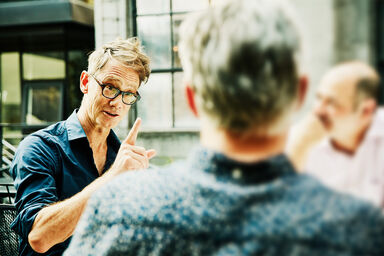 Like scientist, conscious and prescient, sciolist (SIE-oh-list) comes from the Latin verb scire, meaning “to know.” Scio means “I know,” so a sciolist is a person who walks around saying “I know” all the time. Sound about right?

Sciolist has always been an insult, translated into everything from “smatterer” to “knowledge pretender” (two very good put-downs if you’re in need of more). When you call someone a sciolist, you’re saying that they’re acting like they know more than they actually do. It’s probably true; after all, those who are really knowledgeable don’t need to keep talking about it.

Psychology aficionados may recognize that sciolists exhibit traces of the Dunning-Kruger effect, which describes how a lack of self-awareness and metacognition contributes to overconfidence in a particular context. For example, someone who believes they know a lot about cars is too confident to question their knowledge, so they tend to mix up Lamborghinis and Ferraris without knowing it. Sciolists would rather that you think they’re smart than actually be smart.

Signs That You’re Talking to a Sciolist

It’s easy to spot a sciolist after just a few sentences (and sometimes even sooner than that). Watch out for these warning signs that your conversation partner suffers from an acute case of sciolism:

Other Great Words to Shut a Sciolist Up

If you call a sciolist out and they don’t know what you mean (of course they don’t), try out these equally satisfying insults for someone who doesn’t know what they’re talking about:

Want to avoid looking like a sciolist? Add these excellent words to your vocabulary, and you’ll be impressive in your own right: