Word nerds likely know that smog is a portmanteau of the words smoke and fog. They may even know that sitcom comes from situation and comedy, and that a webinar is a combination of web and seminar. But some sneaky portmanteaus have become so integrated into English that you may not realize they're portmanteaus at all! 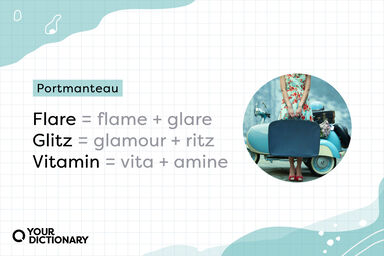 Coined by Lewis Carroll in Through the Looking Glass, a portmanteau is a word that's formed by using letters from two different words. It sounds more complicated than it is — chances are, you use a variety of portmanteaus every day.

Ampersand (&) comes from the words and + per + se + and, the English translation of a Latin phrase meaning "and by itself, and." Say the words fast and you'll get ampersand!

Example: Can you use an ampersand instead of the word "and" here?

The portmanteau blurt comes from the words blow + spurt. Imagine those ill-timed words blowing out of your mouth in a spurting motion the next time you read the word blurt.

Example: The contestant blurted out the secret word and lost the game.

If you've ever wondered why caplet sounds so much like capsule and tablet, it's because caplet is actually a portmanteau of those words. Like a tablet, a capsule is a compressed mixture of elements, but it's shaped like an oval capsule for patients to swallow more easily.

Example: If you don't like the liquid medication, ask the pharmacist if it comes in caplet form.

The word clasp is made up of the actions clutch and grasp. While they seem similar enough, clutch reflects the act of holding tightly, and grasp refers to the act of grabbing or gripping something. Clasp uses both definitions!

Example: Pearl clasped my hand as we walked into the dance together.

Although flair and flare sound alike, only one refers to fire. Flare is a portmanteau of flame + glare (or flash + glare), which provides an appropriate definition of the word itself.

Example: The sinking ship sent up a flare for nearby boats to respond.

What do you think of when you hear glitz? It's probably something fancy, which fits because glitz is a portmanteau of glamour and ritz.

Nowadays, everyone has a favorite podcast. But back in the early 2000s, the word podcast was a brand-new portmanteau between iPod + broadcast. We may not use iPods as much anymore, but podcasts are here to stay.

Example: True crime podcasts are very popular among listeners under 50.

Even your favorite frozen treat is a portmanteau! Combine pop (as in soda pop)+ icicle and you get a popsicle.

Example: Joni stopped by the popsicle stand on her way home.

Example: You look great in your snazzy new tie!

Think of a liquid splattering on the ground, and then slow it down in your mind. You'll likely see both a splash and a spatter, which are the two words that make up the portmanteau splatter.

Example: Milk splattered everywhere when the baby pushed her cup off the table.

The words store and cache both refer to safekeeping, but with different levels of secrecy. They come together in the portmanteau stash to perfectly describe the act of secretly hiding something away.

Example: Taylor keeps a stash of gummy worms in her backpack.

Longer words can be portmanteaus, too! See how many more combined words you know, and how many really seemed like unique words.

When you're dumbfounded, you're surprised beyond words. What's not so surprising is that dumbfounded is made from dumb and confounded — an apt combination for such a feeling!

You know that you should be careful around electricity because you could get electrocuted. But what you may not know is that electrocution is made up of electric + execution.

Example: Be careful around downed power lines, or risk electrocution.

Cellophane, the thin film you use to protect food in the fridge, is also a portmanteau. Cellophane is the result of cellulose (the material itself) and diaphane (meaning "transparent").

Example: Please wrap the leftovers in cellophane before you put them away.

Many fated characters meet by happenstance. This word, meaning "by chance," consists of the words happening + circumstance.

Example: By pure happenstance, we managed to arrive at the bank just as it was opening.

Most everyone can picture a floppy, smiling muppet, but they may struggle with the difference between a muppet and a puppet. The portmanteau muppet uses the words marionette + puppet, indicating that a muppet is a puppet that uses strings or rods.

Inventor George de Mestral created a hook-and-loop closure system that would soon revolutionize the world. He called his invention Velcro — a combination of velvet + croché ("hook").

Example: Charlie used Velcro sneakers until he learned to tie his shoes.

It's easy to believe that a word like vitamin is just an old word, but it's a portmanteau! Vitamin is composed of vita ("life") + amine ("amino"), since scientists initially believed that vitamins contained amino acids.

Example: Spending time in the sun is a good way to increase your vitamin D.

Finding Hidden Treasure in Your Vocabulary

Discovering vocabulary secrets like portmanteaus can feel like finding a little bit of treasure every day! For more fun with words, check out: