At some point in the wedding planning process, words just don’t make sense anymore. What is a boutonniere, anyway, and why is it so important (and expensive)? But while 21st-century wedding terminology may seem overwhelming, it’s nothing compared to the archaic words that surrounded nuptials in the past. 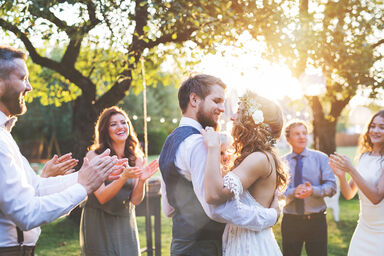 Bride and groom dancing at wedding reception outside
Advertisement

Tired of telling fellow wedding guests that you don’t have a plus-one? Try telling them you’re an agamist. Like the more well-known words monogamy (single marriage) and polygamy (many marriages), agamy (AH-gah-mee) uses the Greek root -gamy to indicate “no marriage.” It could be a philosophy of yours, or perhaps you’re just rocking the single life at the moment.

Recently betrothed couples love to use the word fiance to describe their beloved, but they don’t really have an equally romantic verb to describe the act of becoming engaged. Turns out, they do — fiance comes from the verb affiance (ah-fee-AHNCE), meaning “to promise marriage.” Try it out the next time you tell your engagement story and see if it makes your special moment sound extra fancy.

The term “wedding guest” starts to sound clunky the hundredth time you say it to a wedding vendor. Next time, use bridaller (BRI-dah-ler) to describe the friends and family who will be tearing up at your wedding vows and scarfing down your wedding cake. If you don’t like bridaller, use weddinger for the same meaning.

Some couples feel a little awkward planning their wedding when it’s a second marriage for one (or both) of them. But it’s more common than you think — in fact, there’s even a word for it! Deuterogamy (doo-ter-AH-gah-mee) refers to a second marriage after the first one has ended, unlike bigamy, which indicates that the first marriage hasn’t ended yet. Whoops.

An old-fashioned word and concept, dowry refers to a monetary gift from one spouse’s family to the other spouse. In some cultures, such as the Roman Empire, the bride’s family was responsible for providing the dowry; however, in parts of Asia, Africa and the Middle East, the groom’s family would pay the dowry (also known as “bride price.”) Nowadays, the dowry is more of a gift for the new couple to establish their life together.

Your best friend is getting married and she wants you to write something for the wedding. Something sweet and romantic, but not corny — you know, the perfect epithalamion (ep-ih-THAL-ah-mee-on). Also known as an epithalamium, this song or poem written for a newly married couple is a traditional part of the ceremony (and should definitely count as your gift). If you go above and beyond to write something for their engagement, that’s called a prothalamion: a song or poem written in anticipation of a wedding.

Looking for that ethereal magic of A Midsummer Night’s Dream for your wedding? Start by calling your bridesmaids and groomsmen paranymphs (PARE-ah-nimfs). It comes from the Greek paránymphos, meaning “person beside the bride,” and would complete your fairy-like aesthetic as well as twinkle lights and soft white linens.

Like a dowry, a trousseau (troo-SO) is a gift for a new couple. Unlike a dowry, however, the traditional trousseau consisted of clothes and linens that a couple would need to outfit their new house. The modern equivalent would be a wedding registry, if the registry also included the bride’s clothes and wedding dress (idea alert!).

A Wedding Too Wonderful For Words

For more wordy ways toward wedded bliss, check out: