Slay Your Vocabulary by Bringing Back 'Sanguinary'

Say it out loud: sanguinary. It’s such a lovely blend of consonants and vowels that it should describe the way water flows through a brook, or maybe the first song of a spring lark on a sunny day. But as pretty as sanguinary sounds, its real meaning is not quite so nice. Even so, you could bring back this archaic word in a brand new way that bolsters your vocabulary (and maybe hurts people’s feelings just a little). 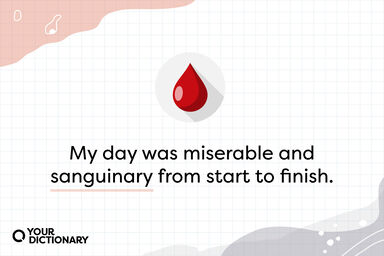 Unless you’re a horror writer or vampire aficionado, you probably haven’t run into sanguinary in your everyday life. It comes from the Latin sanguis, meaning “blood,” and means “bloodshed” or “an extremely bloody scene.” Think of your favorite true crime documentary: It’s telling a truly sanguinary story.

You can also use sanguineous to describe a real “blood and guts” situation, or if it fits into your monster-themed poetry a little better (although for the record, sanguinary makes for a cleaner iambic pentameter). Either way, you’re painting a very specific and violent scene when you use the word.

Don’t Mix It Up With ‘Sanguine’

While the more common word sanguine also refers to blood (“a blood-red color”), it’s not considered a true synonym for sanguinary. Today, the more popular definition of sanguine is “optimistic and cheerful in the face of adversity” — a decidedly different meaning than the grisly sanguinary.

How To Bring It Back

Sanguinary has such a specific, violent meaning that it may be hard to fit into a texting convo (unless you’re texting with Dracula, in which case, he’d be very impressed). But think about how many violent idioms you already use on a daily basis: harsh burn, you’re killing me, take a stab at it, break a leg, at the end of my rope, you slay me, and so on.

Try out sanguinary when you’re describing something that sounds brutal but isn’t really:

A Vocabulary Fit For a Horror Movie

If you actually are a horror writer, sanguinary is a welcome addition to your lexicon. But don’t forget these equally incredible words to replace your millionth usage of “bloody” to describe a murder scene:

Make a Killing With Your New Vocabulary

Now that you know how to use sanguinary literally and figuratively, try bringing these words back as well: