Sports Phrases You've Been Using Without Knowing It

You may not consider yourself much of a sports person. But if you’ve ever been blindsided, on the ropes or behind the eight ball, you’re sportier than you think. Sports are so infused in modern culture that there’s no getting away from them — and chances are, you use popular sports idioms in your everyday conversation. 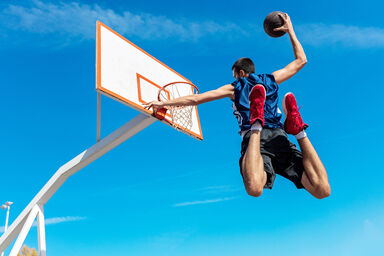 An armchair quarterback is that football fan who barks orders at the team, coach and refs — all from the safety of their own living room. But this nickname isn’t limited to football. When you refer to someone as an armchair quarterback, you could be referring to anyone who’s offering unsolicited advice while staying uninvolved. (Think of a backseat driver, but even bossier.)

Behind the Eight Ball

Has an unexpected bill or an unwelcome surprise ever blindsided you? You’re not the only one. Quarterbacks who are attacked on their blind side — the origin of this common idiom — feel the pain too. That’s why they depend on their offensive tackles to protect them (and maybe why you should depend on bill auto-pay to protect you).

At work, the boss calls the shots. At home, it’s the parents. But on the shooting range, it’s up to the shooter to predict where their shot will land on a target (hence the phrase). Pool players may also call their shots by announcing where they intend their ball to go, and basketball referees may decide whether a shot was a two or three-pointer, but the phrase started with a gun and a range.

Down to the Wire

Anyone who’s taken a project down to the wire, or to the very last minute, knows how stressful those last few moments can be. The same can be said for 19th-century racehorses and those who bet on them, as the phrase’s literal meaning comes from a wire strung along the finish line. In a close race, officials would use the wire to determine whose horse crossed first. Think of your nose against an actual wire the next time you’re finishing a slide deck 15 minutes before presentation time.

That heartbreaking moment when a fly ball slips through an outfielder’s glove or when a wide receiver fumbles a fourth-down throw — nothing is worse than dropping the ball. But you don’t have to be an athlete to feel the pain; anything from forgetting an important meeting to flaking on a friend can qualify as dropping the ball.

Getting a Second Wind

Don’t give up now — you’re just getting your second wind! This sailing phrase refers to the rejuvenating feeling of your sails catching a wind after being adrift, and is often used by runners to describe catching their breath after being exhausted. But in your everyday life, you’re more likely to get your second wind after writing a long report or staying up all night to finish work.

I’m In Your Corner

Both boxers and BFFs know how important it is to have someone in their corner. For the former, the people in their literal corner are their Cornermen, who give them water and mop up their sweat (and blood). In the BFF scenario, however, the people in your corner are your confidants who support you no matter what. Honestly, they’d also probably mop up your sweat and blood if you needed them to.

“Aren’t you jumping the gun?” your friend asks as you excitedly explain your marriage plans with someone you met yesterday. While there’s no real gun in this situation, there is one in the phrase’s origin — and real jumping, too. It comes from track and field, where a runner’s tendency to jump onto the track before the starter pistol has been fired could result in their disqualification. Essentially, it means “don’t take action too early,” and definitely applies to your 24-hour romance.

Knock It Out of the Park

In baseball, there’s no better feeling than swinging your bat and watching a home run soar over the fence. Your feet barely touch the ground as you run the bases; you feel like you’re flying yourself. A comparable feeling to knocking it out of the park is doing a stellar job on something, whether it’s a work presentation or a fantastic first date.

Par for the Course

A slam dunk is a surefire, easy, no-lose situation. Much like its basketball namesake, where a player jumps up to thrust the ball through the hoop, a slam dunk doesn’t take much effort and feels amazing to accomplish. A lawyer’s slam dunk case may be rife with evidence and witnesses, while an advertising company’s slam dunk proposal would be impossible to reject.

Don’t Throw In the Towel Yet

Still pumped up for sports vocabulary? Check out: