Why Did We Leave These Old-Fashioned Curse Words Behind?

We’ve all had those moments that inspire more … colorful language than we’d intended. Whether you’re rushing to work and you back your car into the garbage can or you accidentally press “send” on an email to your boss that was definitely not supposed to go to your boss, you know the value of a well-placed four-letter word. But even those of us who curse like sailors could use a few new — or, should we say, old — additions to our swear-word repertoire that somehow fell out of popular usage. 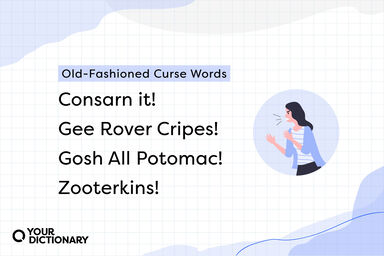 Need to express your exasperation but want to avoid blasphemy? Try bejabbers. It’s an Irish variation of “By Jesus” and can replace “Oh my God” (or “Holy sh**”) in those moments when you cannot believe how long that traffic light is taking. It’s especially helpful in those moments where a child is nearby and you don’t feel like adding expletives to their growing vocabulary.

If you’re looking for a satisfying curse word, Cockney slang is a great place to start. There’s no real “Nora” in the old curse Bloody Nora (although there are many different theories surrounding it); it comes from the phrase “flaming horror,” meaning “I can’t believe it.” In a Cockney accent, it’s pronounced “flamin’ ‘orra’” which shortens to “Nora.” Add a “bloody” for good nature and it’s a perfectly good way to express how ridiculous a situation is.

You may think of an old-timey gold miner peering into a goldless pan when you hear “Consarn it!,” but that shouldn’t stop you from bringing this one back. It comes from the word consternation (much as the similar-meaning damn comes from damnation), which is an excellent way to describe how you’d feel when you yell “Consarn it!” at your phone as the battery dies.

It may look funny, but crying “Gadsbudlikins!” used to be a surefire way to offend the gentler-spoken folks around you. It’s a convoluted way to say “God’s little body,” which may not sound like a great swear word, but hit the bud as you shout it and it gets the job done. “Gads-BUD-lee-kins!” is an appropriate substitute for a particular swear word that can be abbreviated to G.D.

This one sounds like it’s coming from a nerdy scientist in the 1950s, but it comes from a genuinely horrifying place. Gadzooks stands for “God’s hooks,” which refers to the nails that held Jesus to the cross during the crucifixion. So the next time someone mocks you for exclaiming “Gadzooks!” at the prices of your nearby car wash, you’ll know how hardcore you really are.

Mentioning God or Jesus in a negative way — especially when things were going terribly wrong — was terribly scandalous in the past (as it is in many places today). That’s why there are helpful phrases like "Gee rover cripes," or sometimes "G. Rover Cripes," that sound just enough like “Jesus Christ” to get the point across but not actually break any commandments.

Known as a “minced curse word,” which means “you can say it in front of your teacher/parents/boss and probably not get in trouble,” "Gosh all Potomac" is a golden oldie. It’s the oldest variation of gosh in the Dictionary of American English on Historical Principles, and while the “Potomac” part is a mystery, it’s going to be disorienting enough to the guy who stole your parking space (you were waiting for five minutes! It’s yours!).

Talk about a four-letter word! The original F-word came from a 10th-century translation of the Bible and described a naughty act that can (but shouldn’t) take place between a man and another man’s wife. While the word sard wasn’t terribly offensive in medieval Europe, by the time it reached the Victorian era, it was a no-no in mixed company. “Sard it!” is a surprisingly satisfying substitute if you’ve got too many F-words in a sentence.

Want to say “What in tarnation?” but not sound like a rancher from the Old West? Try “What in thunderation?” It’s from the same era but sounds more, well, thunderous than tarnation. It also stands alone as its own curse word, as in “Thunderation! My Amazon package is late again!”

Another funny-sounding but definitely not funny-meaning curse word is zooterkins. It refers to “God’s wounds” (yes, another crucifixion-related expletive). You may be more familiar with zounds, a more popular version that sounds nicer but upon further examination, definitely leans into the “wounds” reference. Try it out instead in those WTF moments and see how people react.

Hurting Feelings Since the Invention of the Dictionary

No matter why you need to drop a four-letter bomb into a conversation, it’s good to have some options. For more ways to color your language, check out: