Words Coined by US Presidents That We Still Use Today

Only a few U.S. presidents have the honor of having their faces imprinted on coins, but several presidents past and present have coined words that we use in everyday speech. Perhaps you think this sounds like fake news or malarkey concocted by some lunatic fringe people on the internet. OK, that’s fair, but there’s no sugarcoating here. Although these presidents did not necessarily create all these words themselves — though many of them did — they certainly popularized them. 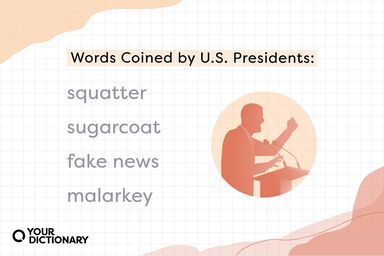 It’s only natural that the nation’s first president would coin a term that would become a cornerstone for every president after him: administration. Washington introduced the word in his Farewell Address in 1796:

In the discharge of this trust, I will only say that I have, with good intentions, contributed towards the organization and administration of the government the best exertions of which a very fallible judgment was capable.

While Washington was the first to use the word in reference to a presidential administration, the word itself had already existed for centuries and was derived from the Latin administrationem, meaning “aid, help, cooperation; direction, management." The word administration was used in relation to government in the 18th century and was referenced in Federalist No. 72, but Washington is the one who effectively changed the definition to “a president’s time in office.”

Did James Madison have hipsters living on his sofa claiming their rights? Probably not. However, he did face a homelessness crisis during his time as president. While the word squatter already existed to describe crouching or compressing, Madison was the first known person to refer to someone who occupies land or property without legal rights or paying rent. Madison used the term in a 1788 letter to George Washington in which the two discussed homeless people in Maine who lived on other people’s property.

Many of them and their constituents are only squatters upon other people's land, and they are afraid of being brought to account.

Next time you text your friend back with a simple OK, remember that you have President Martin Van Buren to thank. While there are a few theories as to how OK became a standard reply in English, a popular explanation is that OK originally stood for “ole kurrek,” a deliberate misspelling of “all correct.” Though Van Buren did not coin OK himself, he took advantage of its growing popularity and incorporated it into his 1840 election campaign. Additionally, OK also worked as an abbreviation of Van Buren’s nickname “Old Kinderhook,” which was a reference to his native Kinderhook, New York.

Although Zachary Taylor is not as widely remembered as other presidents on this list, one thing that stuck was his coining of the title “first lady.” In the early years of American presidencies, the president’s wife was known as the “presidentress” — a powerful title, but not one that naturally rolls off the tongue. Taylor coined the term first lady in 1849 when he eulogized Dolley Madison, the wife of James Madison:

She will never be forgotten because she was truly our First Lady for a half-century.

After this, the president’s wife would be formally referred to as the first lady, and the title endures today.

Abraham Lincoln is notable for many things — abolishing slavery, modernizing the U.S. economy and coining the word sugarcoat. Sugarcoat means “to make something artificially appealing or overly sentimental.” According to Paul Dickson’s novel Words from the White House, four months after his inauguration in 1961, Lincoln wrote a letter to Congress stating:

With rebellion thus sugar-coated they have been drugging the public mind of their section for more than 30 years, until at length they have brought many good men to a willingness to take up arms against the government.

However, the now-common term was not initially well-received. The man in charge of printing, John Defrees went so far as to tell the president “you have used an undignified expression in the message.” Lincoln stood by his choice of word, and a new expression was born: “That word expresses precisely my idea, and I am not going to change it.”

Unless you’re a history buff, chances are you probably can’t name many things that Warren G. Harding did while in office, but you can certainly name some of the words he coined. A century before calls for a “return to normal,” there was Harding’s speech “A Return to Normalcy” which he delivered in the aftermath of World War I.

Normalcy was actually already an official variation of normalcy, but it was rare, and apparently, grammarians weren’t familiar with it because they were swift to deliver judgment on Harding’s use of the word. Ultimately, while Harding didn’t invent normalcy, he certainly, well, normalized it. Harding’s contribution to the English lexicon didn’t end there. He also coined the term we use to describe the men who made America an independent country — founding fathers.

An enduring phrase coined by Theodore “Teddy” Roosevelt in 1913 is lunatic fringe, which in modern usage refers to people with extreme or non-mainstream political beliefs. However, it had nothing to do with politics when Roosevelt coined it. Rather, he was describing an art exhibition:

In this recent art exhibition, the lunatic fringe was fully in evidence, especially in the rooms devoted to the Cubists.

Franklin D. Roosevelt was a well-educated and skilled orator, but he wasn't above using slang from time to time. One of the words he used throughout his presidency was iffy. He’d say, “that’s an iffy question” in response to reporters or throw out the word to describe decisions he disagreed with. He used iffy to describe something that is full of “ifs” or that is undecided, and this is how it is still used today. Not only was this a favorite word of Roosevelt’s, but according to Paul Dickson, he was the word’s creator and used it regularly as early as 1937.

Golf is an enduring favorite pastime for many American presidents, but only Dwight D. Eisenhower is credited with actually coining a golf term. During a 1947 golf game, Eisenhower requested a mulligan — an extra stroke after a bad shot that is not counted against you on the scorecard.

However, the term actually originated earlier than 1947. There are many theories about the origin of the word, but it is most likely attributed to a popular golfer from the 1920s named David Bernard Mulligan. Regardless, the word took off after the 34th president used it, and dads, businessmen and world leaders everywhere have Eisenhower to thank for the mulligan.

The term fake news took off during the Trump presidency so much that the American Dialect Society named it the Word of the Year in 2017. While the phrase and concept of fake news certainly predate Donald Trump, he helped make it a household phrase and introduced an alternative usage. Ben Zimmer, the chair of the American Dialect Society’s New Words Committee described the dual meaning the word has developed:

When President Trump latched on to fake news early in 2017, he often used it as a rhetorical bludgeon to disparage any news report that he happened to disagree with. That obscured the earlier use of fake news for misinformation or disinformation spread online, as was seen on social media during the 2016 presidential campaign.

The term malarkey has been a favorite of Joe Biden’s for many years and means “nonsense,” “lies” or “meaningless.” The word is so associated with him that President Biden used “No Malarkey” as a slogan on the 2020 campaign trail. When asked about his catchphrase, he explained:

It’s aptly named — the reason we named it "No Malarkey" is because the other guys all lie, so we want to make sure there is a contrast, what we’re talking about here.

Malarkey was originally coined by political cartoonist Tad Dorgan in 1922 and is derived from the Irish surname Malarkey or Mullarkey. Though he didn’t create it, Joe Biden gave this obscure slang word new life and brought it into the public consciousness.

Noteworthy Words We Should Use More Often

With so many words in the English language, it’s easy to take a lot of them for granted. Review some words that can enrich anyone’s vocabulary.