Words and Phrases That Science Fiction Has Made Very Real

We’re currently living in the future our parents and grandparents could only read about — well, almost. Our present version of their future isn’t quite Blade Runner, but it comes complete with robots steadily entering the workforce, billionaires competing to build the best spaceship, and even a Metaverse. While these concepts are now everyday terms, they all got their start in the imaginations of some of the greatest science fiction writers of the 19th and 20th centuries. 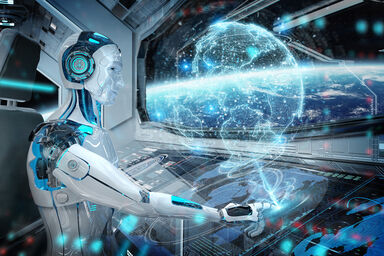 When you mention robots, many people may immediately think of the image popularized by Isaac Asimov’s classic I, Robot. In fact, Asimov is credited with coining the term robotics. However, credit for the now-universal word robot actually goes to Czech playwright Karel Čapek in his 1920 play R.U.R: Rossum’s Universal Robots. He adapted robot from the Czech robota, meaning “forced labor.” Karel Čapek doesn’t get all the credit, however — it was actually his brother, Josef, who invented the word robot when he suggested it in place of labori in the script.

The word robot grew increasingly popular over the next few years and was popularized in part by the short story “I, Robot,” which was published in 1939 by Eando Binder. Yes, that’s right — not only did Asimov not invent the word robot, he also stole (ok, borrowed) the title “I, Robot.”

Gregory Benford penned the first story about a virus, The Scarred Man, in 1970. Not the respiratory kind of virus, but the kind that made John McAfee a very rich man. Benford was an astrophysicist who wrote over 200 scientific papers and advised just about every major agency in the U.S., including N.A.S.A. In other words, he was in the position to know that computer viruses were going to be an issue. When the first computer virus spread on ARPANET — an experimental computer network — in 1971, Benford got to be the “I told you so” guy since he himself had worked on ARPANET in the 1960s.

Before the DeLorean or TARDIS took off, there was the good old-fashioned time machine. It may come as a surprise that the first use of the word time machine was, well, in The Time Machine in 1895. The same goes for time traveler. The terms were created by the legendary H.G. Wells. Wells was a father of science fiction whose works not only revolutionized the genre but revolutionized the world. His training as a biologist and position in London society gave him unique insights into the technological advancements of the time, which he implemented in his novels to iconic effect. Alas, time travel technology is not quite as far along as Wells predicted, but many of his other predictions have come true (for better or worse).

H.G. Wells was the master of science fiction turned science reality (still waiting on time travel, though). Years before an atomic bomb was dropped on Hiroshima, H. G. Wells coined the term atomic bomb in his 1914 book The World Set Free. Although the atomic bomb was still in development and it would be years until the technology became widespread, Wells drew from the available research at the time to predict a technology that would have Cold War-era children ducking under their desks in decades to come.

Wells' work was influential not only in literary circles but on real scientists who admired his work. One such scientist was an acquaintance of Wells, Hungarian physicist Leó Szilárd. Allegedly inspired by The World Set Free, Szilárd created the first nuclear chain reaction in 1933.

Once again, H.G. Wells was way ahead of his time. Although he did not coin the exact term genetic engineering, the concept featured prominently in his works such as The Time Machine and The Island of Doctor Moreau. The concept was further explored in the 1936 story Proteus Island by Stanley G. Weinbaum.

Before man went to the moon or billionaires started racing to space, the idea of going to infinity and beyond — and by extension, the way to get there — was limited to the imaginations of science fiction writers. The word spacecraft is credited to business magnate J.J. Astor’s novel A Journey in Other Worlds, released in 1894 and set in the then-distant future of 2000.

Spaceship may have been coined as early as 1880 in the newspaper The Pall Mall Gazette in reference to yet another science fiction novelist, Jules Verne. Funnily enough, The Pall Mall Gazette was owned by William Waldorf Astor, a relative of J.J. Astor. What’s more, the publication was referenced in several of H. G. Wells’s works.

Before Mark Zuckerberg launched a thousand memes with his announcement of the Metaverse in October 2021, the word and concept of the metaverse were created by Neal Stephenson in his 1992 science fiction novel Snow Crash. In Snow Crash, people use avatars to interact with each other in a 3D virtual reality. Following the announcement of Facebook — now called Meta — launching the Metaverse, Stephenson tweeted:

“Since there seems to be growing confusion on this: I have nothing to do with anything that FB is up to involving the Metaverse, other than the obvious fact that they're using a term I coined in Snow Crash. There has been zero communication between me and FB & no biz relationship.”

William Gibson, who pioneered the subgenre cyberpunk, coined the term cyberspace in his 1982 short story “Burning Chrome” and his 1984 novel Neuromancer.

He didn’t exactly mean for it to refer to the World Wide Web, which officially went live in 1983. Rather, it was meant to convey a sense of power and was a derivative of cybernetics, which itself is derived from the Greek word kybernetes or “guide.” Gibson notes, “Cyberspace, as described in Neuromancer, is nothing at all like the internet that we live with, which consists mostly of utterly banal and silly stuff.”

Deep space refers to the regions of outer space far beyond the Earth’s atmosphere or gravitational pull. So, basically all of it. In E. E. “Doc” Smith’s 1934 novel Triplanetary (yet another novel that deals with genetic engineering), deep space describes the empty space between stars.

Although the onomatopoeia beep was created in the 1920s to describe the sound of a car horn, it did not enter the popular lexicon to mean “an electronically produced, high-pitched sound” until 1951. That is when famed science fiction author Arthur C. Clarke used the word in his novel The Sands of Mars. In this particular story, beeping refers specifically to space travel, but the word has found many earthly uses.

Zero gravity or zero-g refers to the sensation of complete weightlessness that exists only in outer space. Comic book artist and Daredevil creator Jack Binder created the phrase zero gravity in his essay "If Science Reached the Earth's Core" in 1938. However, he was referring to the lack of gravity at the center of the Earth rather than the lack of gravity in space. Arthur C. Clarke later abbreviated the term to zero-g in his 1952 novel Islands in the Sky, which takes place in a space station where there is, inevitably, zero gravity.

From Science Fiction to Science Reality

Now that you know where these words come from, read about how they are applied by some of the great scientists and inventors of the past and present.