Your Shoe Has a What?! 'Aglet' & Other Words for Things You Didn't Know Had Names

Thingy, doohickey, thingamabob, whatchamacallit — there are many excellent words to call that thing you can’t quite describe. It’s usually accompanied by finger snapping and “You know … that thing!” But as satisfying as whoozit or doodad is to say, that random item you’re pointing at does have an actual name — and it’s probably a doozy. 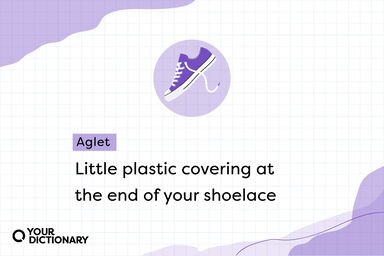 Aglet: That Thing On Your Shoelace

If you’ve ever tried to lace a shoe with a frayed shoelace, you know how important an aglet is. From the French word aiguillette (“small needle,”) aglet refers to that little plastic covering at the end of your shoelace that you don’t even notice — until it’s gone. (Don’t even try the scotch tape trick. Just go buy yourself some new laces.)

Anatomical Snuff Box: You Have Two

Hold out your hand with the backside facing you. Spread your fingers. Do you see that triangular section between your thumb and index finger? It’s called your anatomical snuff box (also known as the radial fossa) and was a perfect spot for people to place powdered tobacco so they could inhale it. The practice may be gone, but the name is here to stay.

When you board a flight or visit your grandma, you may notice a delicate piece of fabric on the back of your seat. It’s called an antimacassar, from the 19th-century brand of hair oil called Macassar. Besides being decorative and pretty, it’s meant to protect the seat from your oily head.

Shells, seeds, pits — there are all kinds of things inside your food that shouldn’t be inside your body. The things that you spit out are known as chankings, from the English verb chank (“to chew noisily”). And yes, that includes that mouthful of meatloaf that you stealthily spat into your napkin when no one was looking (bad news, everyone was looking).

Dewlap: It’s Not a Double Chin

What’s the first thing you notice about yourself when you accidentally set your phone camera on selfie view? If you have a second before frantically flipping the camera around, you may cringe at your dewlap — that flap of skin below your chin. It comes from the Middle English dewelappe and is also known as a wattle. The dewlap is commonly found on animals such as iguanas and cattle, and sometimes, surprise selfie victims.

Without an escutcheon, your keyhole would just be a hole in the door. An escutcheon (from the Old French escusson, meaning “shield”) is the metal and sometimes-decorative plate around a doorknob or a keyhole, and chances are, you’ve never paid attention to yours. Take a look at the light switches around your house — they may boast some fancy escutcheons as well.

Put your hands together like a bowl. Congratulations: You’ve created your very own gowpen! This Scottish word is delightfully specific and can even be used as an adjective of quantity (gowpenful). The size of a gowpen varies by one’s hand size, so try not to use it as a standardized unit of measurement.

How do you write a swear word without actually writing a swear word? Use a grawlix — the term coined by Beetle Bailey creator Mort Walker. It describes the series of symbols you use to convey cursing (such as “$%^&$!”) and has helped many a teenager express themselves without getting grounded.

Octothorpe: Call It Pound or Hashtag

Although octothorpe sounds like a villain in a superhero comic, you’re more likely to find it in your phone keypad, or perhaps your Twitter feed. It’s the symbol that used to be called pound (#) before the online generation called it hashtag (also #). There are all kinds of theories about its origin in the 1960s, but suffice to say, octothorpe is the best name for that little symbol we’ve heard so far.

Oeil-de-boeuf: It’s Not For Oxen

If you’re lucky enough to have a high ceiling and lots of natural light in your house, you may have an oeil-de-boeuf (EEL-de-boof) or two. It’s French for “ox eye” and refers to that small, round window that often sits atop a larger window or doorway. You can’t look through it, you can’t clean it, but you’re pretty sure you want it.

Overmorrow: Not Today, Not Tomorrow

The phrase “the day after tomorrow” is so cumbersome, especially when you’re trying to make plans. Why isn’t there a better word for that day? There is — it’s the Old English overmorrow. This archaic word definitely deserves a comeback, so try to slip it into an important work meeting or a first date to establish that you are a) a planner, and b) know some great words.

Tittle: Dot Your I’s and J’s

This inappropriate-sounding-but-not-inappropriate-meaning word has a specific role and place. A tittle (from the medieval Latin titulus, meaning “a small stroke or accent”) is the dot that lives on your lowercase i’s and j’s. If this definition is too obscure for you, try using tittle to mean “a small amount” — after all, it sort of looks like a portmanteau of tiny and little, right?

Ullage: Who Drank My Soda?

Winemakers and wine lovers know that a large amount of ullage is not ideal. Ullage is derived from the Old French euillier (“to fill up”), the unfilled space in a bottle of liquid, and it can indicate anything from a leaking water bottle to someone stealing sips of your Diet Coke.

Uvula is another one of those words that sounds NSFW but is actually pretty tame. It comes from the Latin word for “grape” (uva) and describes the fleshy ball that hangs down in the middle of your throat — the one cartoonists often draw above the tongue when a character is screaming. A fun fact about the uvula: Only humans have them.

Zarf: It Protects You From Your Coffee

The term “coffee sleeve” is not a bad one. It accurately describes that cardboard thing that keeps you from burning your fingers on your paper coffee cup. But why settle for a boring three-syllable description when you could use zarf, the Arabic word for “hot cup holder”? (Now you just have to encourage your coffee shop to make their zarfs as fancy as real zarfs.)

A Cornucopia of Words

The next time someone refers to an escutcheon as “that thingy-doo,” you can (politely) educate them on the proper word. For more words that should be part of your everyday conversation, check out: