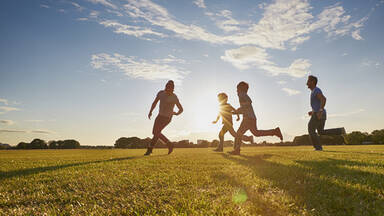 The sun is always shining. Sometimes, you can’t see it because of the clouds, but it is always there. One of the most abundant sources of renewable energy, special panels collect solar energy.

Heat or thermal energy can heat houses and provide electricity. It’s also used to warm pool water and heat fluids in power plants. However, the amount of heat energy available varies based on weather conditions.

Windmill farms are becoming more popular. In some areas, these large fields of endless windmills can go on for hundreds of miles.

The sun heats the surface of the earth at an uneven rate creating the wind. Not only that, but these wind patterns can be predictable. By strategically placing windmills, power companies can harness the power of the wind to generate electricity. While a family might use a wind turbine for electricity in their home, large electric companies create windmill farms to light up a whole city or state, reducing the need for coal and other non-renewable sources of energy.

A dam manipulates the flow of water. By spinning a turbine, the water creates mechanical energy used to generate electricity. Actually, until 2019, hydroelectricity was the largest renewable energy source according to the U.S. Energy Information Administration.

To figure out what geothermal energy is all about, all you have to do is break down the word parts. Geo means earth, as in geography. Thermal means heat, like thermal underwear. Put it all together, and you have the earth’s heat.

The heat under the earth is constant. The further you dig down, the hotter it gets. This is the reason volcanoes explode liquid magma; it comes from deep in the earth. Therefore, it’s possible to harness heat energy through piping systems to heat water and buildings, as well as to create electricity using steam.

The oceans are large. In fact, most of our world is covered with oceans. Ocean energy is a great renewable energy source, too. Since the waves are always moving, it’s possible to capture and use this mechanical energy. Additionally, the uneven heating of the ocean from the sun creates thermal energy. Barrages (dams), channels, and floating systems can be used to harness this energy.

One of the simplest elements and most abundant atoms found on the planet is hydrogen. It is also one of the basic elements in water. When it’s separated from other elements, its energy fuels rockets and powers cars. However, the process of separating hydrogen from other elements is expensive and time-consuming.

The earth provides us with renewable energy from the sun, wind, and oceans, but also through plants and animals. Biomass is the use of the natural materials around us to create energy including the burning of trees or using the methane created by trash dumps. Explore the different types of biomass energy.

Ethanol is a biomass fluid created from the fermentation of raw materials like corn, grains, grasses, sugar cane, and woodchips. This colorless fluid has several uses, but one of the most well-known is powering cars.

Vegetable oil to power a car! Sounds ridiculous, right? Well, vegetable oil and animal fats are one of the main components of biodiesel fuel. It’s a fuel alternative that can be used in all different types of vehicles and equipment.

Landfills and sewage treatment plants are alive with anaerobic bacteria. These decomposers are working hard to naturally break down waste. Filling their bellies creates a byproduct composed of methane and carbon dioxide. This biogas is used to generate electricity. In fact, Iowa and Wisconsin dairy farmers use animal waste in this way.

Wood is probably one of the most well-known renewable energy sources, since it has been used for everything from cooking to lighting for thousands of years. In fact, the EIA notes 2% of residential homes use wood as an energy source. While wood is great for heating your home, sawmills and lumber companies can use the waste created to create electricity. Now that’s using their waste to their advantage.

Renewable energy sources are all around us. However, finding cheap and easy ways to harness them is a challenge. Learn more about energy by looking at electric energy in action.