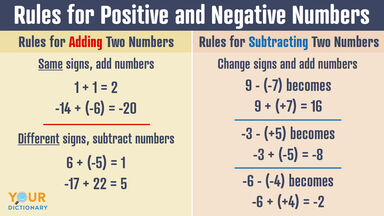 When using positive and negative numbers, you use the rules for signed numbers (numbers with positive or negative signs in front of them). Also known as operations for signed numbers, these steps can help you avoid confusion and solve math problems as quickly — and correctly — as possible.

Follow these rules to determine the best way to add, subtract, multiply, and divide positive and negative numbers. Remember, if there is no + or - sign, the number is positive.

When you're adding two numbers together and they have the same sign (two positive or two negative numbers), add the numbers and keep the sign. For example:

As you can see, adding numbers with different signs is really a form of subtraction. When using a number line, your sum will end up closer to zero.

Subtracting positive and negative numbers means that you add the opposite numbers, or additive inverse. Change the subtraction sign to addition and change the sign that follows to its opposite. Then follow the steps for addition. For example:

A good tip is that whenever you see a negative sign and a minus sign together, such as in 9 - (-7), immediately make them positive signs. The negative signs cancel each other out, and the equation becomes an addition problem.

It seems like multiplication and division would be more complicated than addition and subtraction, but they're actually much simpler. The rule for multiplying positive and negative numbers with the same sign (two positive or two negative) is that the product will always be positive. For example:

The same rule applies for division. When dividing a number by another number with the same sign, the quotient (answer) is positive. For example:

When multiplying a positive and a negative, the product will always be negative. It doesn't matter what order the signs are in. For example:

In all of these cases, you first need to multiply or divide the numbers. Then decide whether the product or quotient is positive (two positives or two negatives in the equation) or negative (one positive and one negative in the equation).

This method follows the same rules as above but might help you solve the problem more quickly if you prefer to work out the signs beforehand. Once you understand positive and negative numbers conceptually, you can decide which method works best for you.

Once you know the basics of math and its rules, the entire mathematical world is open to you. Unlike other subjects, math isn't nuanced or up for interpretation — it just is what it is! For more math practice, check out the steps to long division problems (with examples). You can also review the different types of numbers in math before your next math assignment.