Examples of Checks and Balances in the Constitution 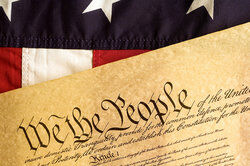 The definition of checks and balances is simply a system for distributing governmental powers. Each branch of the government has specific procedures only they can follow that help protect against fraud, errors, and illegal actions. These special procedures are distributed as evenly as possible so no one segment has ultimate power or more power than any other.

A system of checks and balances can be found in almost any constitutional government, not just in the United States.

In 1787, several U.S. states got together to update the Articles of Confederation, which was the current way states work together as one group. The goal was to create a U.S. Constitution that would give a central government power to act nationally, but not take away the rights of any state or its people.

They specifically wanted to avoid a government that copied the king of England and his parliament.

Once these branches were established, Congress realized they’d need to make sure no branch could simply overtake the others. This is where the system of checks and balances came in.

Articles of the Constitution

The first three Articles tell you more details about each branch of the government:

Modern Examples of Checks and Balances

A quick scan of major new stories over the last couple decades will show you examples of checks and balances in modern times.

The Constitution in Action

Take a look at current events and you’ll probably see examples of checks and balances today in government proceedings. The president of the United States changes every four years, or eight years if a president is re-elected, and some government positions change more frequently. This keeps the system of checks and balances relevant as beliefs, attitudes, and opinions change. Continue exploring governmental powers by learning about the 25th Amendment.