Geography is the study of the earth, its physical features, atmosphere, and resources. This includes all Earth's landforms, oceans, and ecosystems, as well as the impact of human society on its environment. 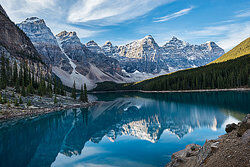 Mountains and a lake as examples of geography terms

There are a lot of geographic terms to know when studying this field, below are 50 basic geography terms with their definitions and an example to help you remember.

All of these terms show different examples of geography. Refer to this glossary whenever you need to recall essential facts and definitions for common geography terms. Continue learning about this topic by exploring the 5 themes of geography.