Examples of Monomials and Polynomials

A monomial is an expression in algebra that contains one term, like 3xy. Monomials include numbers, whole numbers and variables that are multiplied together, and variables that are multiplied together. A polynomial is a sum of monomials where each monomial is called a term. Read more about the difference between monomials and polynomials, the rules for each term and several helpful examples. 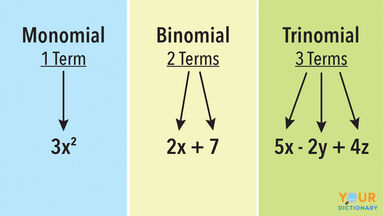 Finding a monomial is easier than it seems. "Mono" means one, meaning that "monomial" includes only one term. It is a piece of a polynomial. Monomials can include these characteristics:

Monomials cannot have a fractional or negative exponent. Monomial examples include:

A polynomial shows the sum of monomials. It is an algebraic expression with a finite number of terms. Because a polynomial is made of monomials, it also cannot have negative exponents.

Degrees of Monomials and Polynomials

The degree of a monomial or polynomial is the highest power of the variable in that polynomial, as long as there is only one variable. If there is more than one variable, you add up the exponents for all the variables to find the degree.

Algebra, which is Arabic for "restoration," is a branch of pure mathematics. Pure mathematics differs from other disciplines because it is not necessarily applied to any particular situation, but it investigates the concepts and beauty of math itself. The history of algebra is enriching as well; from the ancient mathematical tablets of Babylon to the classical days of Diophantus, Greek mathematician and writer of Arithmetica, and the Medieval discovery of algebra itself by the "father of algebra," Al-Khwarizmi (whose name was the inspiration for the word algorithm.), algebra is a way to bring balance to mathematics.