Examples of Theocracy in Government

Not all governments exist where church and state are separate. In fact, theocratic countries use their religion to govern their country. Analyze historical and modern examples of theocracy governments to find out how they work. Uncover whether theocracy and democracy can exist together too. 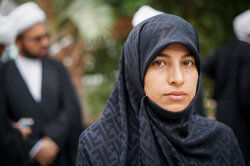 What Is a Theocracy?

A theocracy is a type of government that is ruled by a divine being or religious texts. A ruler or group uses the power of god(s) and texts to create laws and guide government decisions.

Theocracies can have one or more rulers, like religious clergy, but these rulers are guided in their thoughts and actions through one or more deities. There is no separation between church and state; therefore, dissention is not allowed. The term “theocracy” derives from Greek to mean “the rule of God.”

To truly understand theocratic governments, you can look at historical and modern examples.

Separation of church and state isn’t a new idea, but it is more prevalent than it once was. Early civilizations often had a king that was guided by a god or gods. A few examples of countries ruled by theocracy include Ancient Egypt, Tibet and China.

One of the most well-known theocratic governments was that of Ancient Egypt. Though it is divided into different periods, the theocratic monarchy of Egypt lasted for about 3,000 years.

In Egypt, the pharaoh was seen as a divine connection to the gods. They were actually thought of as descending from the god Ra. While the pharaoh was the top representative, he or she was also guided by advisors and high priests in carrying out the gods’ wishes for temples, laws and defense.

There were several Chinese dynasties that practiced a theocratic government, including the Shang and Zhou Dynasties. During the Shang Dynasty, the priest king was thought to communicate and interpret the wishes of the gods and ancestors. The Shang Dynasty was overthrown by the Zhou Dynasty, which used the Mandate of Heaven as a way to overthrow the government. This mandate stated that the current ruler was chosen by a divine force.

Theocracy isn’t just a historical concept. There are a few countries and governments that rule using a theocratic government. Many follow Islamic law, but there are a few that mix Christian principles as well.

Located in what is considered the Middle East, the government of Iran is a mixed theocratic government. The country has a supreme leader, president and several councils. However, the laws of the constitution and justice in the state are based on Islamic law. The government and constitution of Iran mixes both theocratic and democratic principles and elements.

The Vatican government follows the laws and teaching of the Catholic religion. The Pope is the ruler of the country, sometimes called the Holy See, and delegates powers to legislative, executive and judiciary authorities. While the country does have a president, that president’s rule can be overturned by the Pope. The Pope only rules the independent government of Vatican City, which was made a state in 1929.

Much like Iran, Saudi Arabia follows the rulings and teaching of Islamic law. This theocratic country is considered a theocratic monarchy. The government is ruled by a king and prime minister. The ruling family has absolute power and there is no Constitution. Saudi Arabia does, however, have the Basic Law of Governance that guides justice. Those who reject the religious teachings within the country are given strict punishment.

Forms of government are differentiated by who has the power.

Can Theocracy Coexist With Democracy?

A theocracy can exist within other forms of government. While the religious rule may not form the official government, there are countries that make this combination work. For example, Iran currently combines theocratic and democratic principles.

However, having a government that places a divine figure at the top goes against the democratic principle of empowering the people to create laws of their own. Therefore, the two forms of government can coexist with modification, but a true democracy could not be a theocracy.

Throughout history, and currently, there have been several theocratic governments that operate using a mix of different government types. Now that you know about theocracy, explore how totalitarian governments work through examples as well.