When you think of a volcano, you probably think of a mountain with a large hole at the top spewing lava and volcanic ash. But that's not always how volcanoes look or behave. Learn all about the four major types of volcanoes found around the world, and discover their unique characteristics. 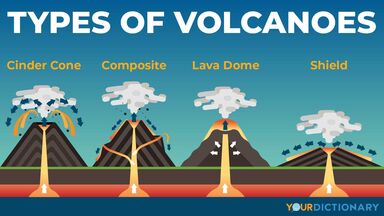 Cinder cones, also called scoria cones, are probably what you think of when you hear the word "volcano." Cinder cones are named after the igneous rocks (called "cinders") that fall and form the cones after an eruption. They are the most common type of volcano on the planet.

The characteristics of cinder cones include:

Cinder cones are typically found as single volcanoes. However, they can also form around larger volcanoes as secondary parasitic cones. One of the most famous cinder cones in the world is Paricutin, which first erupted in 1943 and formed over nine years in Mexico.

Unlike cinder cones, composite volcanoes are made of a variety of geological materials. They are larger and more violent than cinder cones but are not as common around the world.

The characteristics of composite volcanoes, also known as stratovolcanoes, are:

Some of the most significant volcanic eruptions in history have occurred in composite volcanoes. Mount Vesuvius, whose eruption destroyed the neighboring city of Pompeii in A.D. 79, is a composite volcano, as is Mount St. Helens, which erupted violently in A.D. 1980 in Washington state.

Lava domes are not as easy to spot as conical cinder cones and composite volcanoes, but they are still distinctive geological features. The lava in their eruptions is very thick and oozes out of the vent, rather than erupting into the air.

Characteristics of lava domes include:

Think of a lava dome as the result of a thick and sticky lava flow. Unlike other volcanic eruptions, the lava just doesn't flow very far. There is a large lava dome inside the summit crater of Mount St. Helens, caused by a slow and viscous lava flow that never made its way down the sides of the volcano.

Shield volcanoes are the largest type of volcano. They are wider than they are tall, and are called shield volcanoes because they look like the shield of a medieval knight.

Some unique characteristics of shield volcanoes are:

Mauna Loa, the largest volcano on earth, is 13,677 ft. above sea level. However, its base is on the ocean floor, making the volcano's total altitude over 28,000 ft. It is one of the Hawaiian shield volcanoes whose eruptions on a hot spot in the middle of the Pacific Plate created the Hawaiian islands.

Astronomy may be what makes the world go 'round, but no one can argue that geology rocks. But volcanoes are only one part of the geological composition of our amazing planet. Learn all about the 3 main types of faults along and between tectonic plates. And if you're interested in more geological phenomena, check out these convection examples that occur in our natural world.