Nature vs. Nurture Examples: Common Issues in the Debate

For centuries, the debate has existed within the psychological community and beyond concerning the topic of nature versus nurture in terms of human development and achievement. Specifically, what is the main influence on a person — their genetics or their environment? Discover some basic nature vs. nurture examples and consider your opinion. 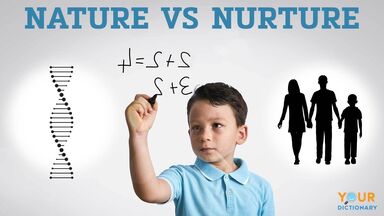 While many contemporary psychologists and other individuals agree that development is influenced by both nature and nurture, the participation of genetics vs. environment is still a hot topic, particularly when certain subjects are discussed, such as intelligence, personality and homosexuality. There are many real-life examples of nature vs. nurture to consider.

When someone achieves greatness thanks to an innovation or other breakthrough, it is usually agreed that the individual has a high level of intelligence. Often, when exploring the background of the individual, the influences of nature versus nurture are questioned.

How Nature May Impact Intelligence

Those who would argue that nature is largely to thank for the individual’s ability to achieve greatness might point to his or her parents and use their level of intelligence as a reason for why he or she is so successful. Perhaps the child developed early skills quickly and this would be used to show that the child was clearly, “born smart.”

How Nurture May Impact Intelligence

Those who would argue that a child's intelligence was affected by nurture would look at the child's educational background as well as how his or her parents raised him or her. These individuals would state that the intelligence level which permitted the child to be so successful is largely the result of the child's upbringing and the school system.

The development of personality traits is often part of the nature versus nurture debate. People want to know how children develop their personalities.

How Nature May Impact Personality

Often it is easy to see similarities between a child’s personality and one or both of their parents’ personalities. In this situation, it would seem that the child's personality has developed largely from the influence of the parents' genes.

How Nurture May Impact Personality

In some situations, children develop personalities, or tendencies toward certain behaviors, such as shyness or aggression, that can’t seem to be explained because neither parent demonstrates the same trait. In this situation, it can be argued that nurture is at play in the development of the child's personality.

There is much discussion regarding the role of nature versus nurture with regards to the occupation that an individual chooses to pursue.

How Nature May Impact Occupation

How Nurture May Impact Occupation

Children do not always grow up to pursue occupations similar to their parents, even if they do inherit talent in a certain area. For example, someone who has two professional athletes as parents may want to pursue career goals that do not require so much extensive travel. The individual may opt out of a professional sports career in order to be more present at home for his or her own children as a result of having parents who traveled so much. In this case, nurture prevails over nature.

Does a person choose leisure activities based on a genetic predisposition or does nature have more of an impact?

How Nature May Impact Leisure Preferences

If a person was raised in a family where outdoor activities are the norm, is that individual destined to choose similar leisure activities as an adult? When people who were raised in an outdoorsy family go on to continue enjoying things like hiking, camping and gardening, some might use that to suggest that nature is at play.

How Nurture May Impact Leisure Preferences

Others might suggest that nurture is at play. Those who enjoyed outdoorsy activities in childhood and continue to do so as adults may choose that path because it's the one that they have firsthand experience with. People who didn't enjoy such activities as a child may go in a completely different direction as an adult. Being required to go camping as a child could lead to an aversion to such activities. In this case, nurture is definitely at play.

Are creative talents inherited, or does nurture play a significant role?

How Nature May Impact Creativity

Will a person whose parents are naturally very creative have the same talents? Is the child of a singer, dancer or artist destined to have natural talent in this area? Certainly there are child prodigies whose natural talents shine through with little nurture, but is this the norm?

How Nurture May Impact Creativity

Are people sometimes destined to be obese simply because one or both parents were significantly overweight? Is this a nature issue or a nurture issue?

How Nature May Impact Obesity

If a person has one or more parents who have a medical condition that causes obesity, will the child naturally be obese? If the medical condition is genetic in nature and can be passed from parent to child, then nature could play a role in whether or not their child is destined to have obesity.

How Nurture May Impact Obesity

If a person is obese solely because of their diet and exercise habits, then that person's weight is due to their own behavior rather than a genetic cause. However, if the person's children are raised with the same diet and exercise habits, nurture could still result in obesity. If the children are active and follow a more healthy diet, though, they might not become obese.

Are some people born bad? Or do people develop criminal tendencies as a result of the environment in which they grow up.

How Nature May Impact Criminal Acts

Some people believe that a tendency to behave in a way that violates societal laws is something that people are born with. If the child of someone who is a convicted criminal also commits criminal acts, some argue that the outcome was inevitable due to the impact of nature.

How Nurture May Impact Criminal Acts

Not everyone who has a parent that has committed a crime goes on to commit criminal acts themselves. Seeing loved ones suffer consequences associated with criminal behavior can cause someone to vow never to commit a crime, which would impact that nurture has an impact on such behaviors. Additionally, not all people who commit criminal acts have parents or other relatives who have done the same.

The debate about homosexuality and whether it is the result of nature or nurture has spanned throughout history, but has taken on even greater importance in more recent years as the rights of these individuals are being hotly debated throughout the world.

How Nature May Impact Homosexuality

Some individuals believe that homosexuality is a biological factor, no more a choice than eye color or foot size. These individuals are debating from the perspective of nature being responsible for the development of the individual.

How Nurture May Impact Homosexuality

For every argument that suggests that nurture has more impact than nature, there are other arguments to the contrary. It seems that both nature and nurture can significantly impact human nature, human behavior and health outcomes. Now that you're familiar with a few ways that the nature vs. nurture debate plays out in real life, it's a good idea to further explore human behavior and genetics. Get started by reviewing some examples of genotype and phenotype.