The Prehistoric era (2.5 million years ago to around 600 B.C.) is the period of time that human life existed on Earth before there were written historical records. Thanks to archaeological research and expeditions, we know that early humans were using stone tools as far back as 2.5 million years ago. We now categorize the periods of prehistory according to the materials that humans used to build their tools. Take a look at a simple guide to the Stone Age, the Bronze Age and the Iron Age in prehistoric times. 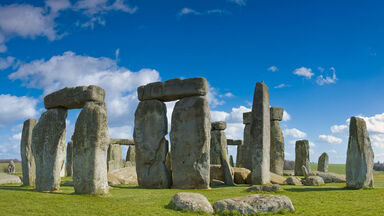 Historians consider the Stone Age to have taken place between 2.5 million years ago and 3000 B.C. Because it's such an extensive amount of time, they generally divide most civilizations' history into three periods: the Paleolithic period, the Mesolithic period and the Neolithic period. The era is distinctive for the presence of stone tools, weapons and art in early human life.

The first part of the Stone Age was the Paleolithic period, which lasted from 2.5 million years ago to 10,000 B.C. During this era, early humans lived among other related species (including Neanderthals) in caves and basic huts and traveled in small nomadic tribes. The earliest humans moved from North Africa and the Middle East to Asia, Europe and other surrounding regions. They made unpolished tools out of bone and stone that they used for hunting, fighting, building, and art. Humans in the Paleolithic period were also able to use fire to cook their food. The last Ice Age also took place during this time, and its end marked the beginning of the Mesolithic period.

During the Mesolithic period (around 10,000 B.C. to 8000 B.C.), sometimes known as the Epipaleolithic, humans used polished stone tools including spears and arrows that were smaller and less unwieldy than Paleolithic tools. The warmer climate after the Ice Age brought human tribes to river areas to set up their camps. These tribes functioned as hunter/gatherer societies in modern-day Europe, Greece, Russia, Africa, and Asia. The Mesolithic period is primarily known as a transitional period between the Paleolithic and Neolithic periods.

The Neolithic period (8000 B.C to 3000 B.C.) introduced agriculture, construction, animal domestication, and food production to human civilization, starting in the Fertile Crescent (modern-day Middle East). Humans had spread far and wide during their time as nomadic tribes but now settled in farming communities where they used polished stone tools to work the land. Sites such as Stonehenge (3500 B.C.) and mud-brick houses have since been found with evidence of human rituals and use. Some historians consider the end of the Neolithic period to coincide with the Chalcolithic period, also known as the Copper Age, which transitioned to the Bronze Age.

The appearance of metal tools, particularly bronze, marked the end of the Stone Age. Humans learned the craft of metalworking and used it to advance their civilizations at unprecedented rates. The Bronze Age lasted from 3000 B.C. to 1300 B.C, which was comparatively much shorter than the Stone Age.

Once humans began using metal instead of stone as their primary material, they entered the Bronze Age. Bronze, as well as copper and tin alloy, was harder and more durable than the stone creations of prior civilizations. Humans in the Bronze Age also began making clay pottery, textile-based clothing and developing the first writing systems.

Not every civilization entered the Bronze Age at the same time. The earliest evidence of human uses of bronze are from Greece before 3000 B.C., while there is no evidence of metalworking in much of Europe and Asia until several hundred years later. Civilizations such as the Indus Valley, Sumer and Babylonia of Mesopotamia were taking shape on the rivers and forming their own governments. The Code of Hammurabi from the Babylonian culture is one of the earliest recorded legal codes, and ancient Egypt constructed the Pyramids of Giza at this time as well. Civilizations also established trade routes to gain resources and influence from each other.

Collapse of the Bronze Age

Around 1300-1200 B.C., there was a sudden cultural collapse throughout these civilizations. The period of rapid growth came to a disruptive end with evidence of drought, severed trade routes and invasions by nomadic tribes. Historians consider this period to be among the most disastrous in human history. Many human civilizations, including Mycenaean Greece and the Hittite civilization, were lost forever. But thanks to the developments of the years that preceded the crisis, human development as a whole was not derailed.

The Iron Age (1200 B.C. to 600 B.C.) saw widespread use of iron in metal tools. Because humans learned how to heat iron and forge it with carbon in ferrous metallurgy, they could now use steel in their tools and building construction. It was much lighter and cheaper to use steel and other metal alloys than bronze, which allowed technology to advance at a high rate.

An Age of Sophistication

The Iron Age was a time of sophisticated innovation in prehistory. Instead of working their fields with wooden farming equipment and grinding grains with stone, humans could use iron to create more effective tools. This allowed them to produce more food than they needed, which they could sell. Craftsmen could create wearable jewelry and large amounts of sewed clothes with the new metals available. By the end of the Iron Age, iron and steel had completely replaced bronze as a major building material. In fact, very little about the building process changed until the Industrial Revolution over a millennium later.

Different Timelines Around the World

While the timing of the Stone Age and the beginning of the Bronze age were mostly shared among human civilizations, the Iron Age occurred in different areas at different times. Civilizations in Southern Asia and around the Aegean Sea entered the Iron Age around 1200 B.C., but iron metallurgy was already popularly used in Northern Africa several hundred years prior.

Eastern and Central Europeans began using iron in their tools around 800-900 B.C, and Celts in Northern Europe didn't enter the Iron Age until around 500 B.C. (and didn't leave it until the first century.) Civilizations in sub-Saharan Africa transitioned directly from the Stone Age to the Iron Age around 1400 B.C., and Greece skipped the Iron Age entirely after the fall of the Mycenaeans. It was one of the first periods in human history with such a widely varying global timeline.

The Beginning of Recorded History

Prehistory generally ended around 600 B.C. as different cultures began recording their history. The Greek historian Herodotus, known as "the father of history," finished writing The Histories in 430 B.C. It recounted the historical politics and traditions of the area, as well as the establishment of the Achaemenid Empire in 550 B.C., which many historians consider to be the end of the Iron Age. Others see the end of the Iron Age as the beginning of Roman conquests throughout Europe in the first century. No matter where prehistory ended, there's little debate about the value of recorded ancient history that followed.

The Birth of Human Civilization

While some may think of dinosaurs and cavemen when they hear the term prehistoric, it really indicates the period of time when humankind was starting its remarkable journey. Thousands of generations brought us from the early days of contained fire and stone weapons to efficient metal equipment and the ability to record history. To see what comes next in the timeline, check out these explanations about the four types of ancient Greek government. You can also put the prehistoric era into context with an overview of all the historical eras around the world.