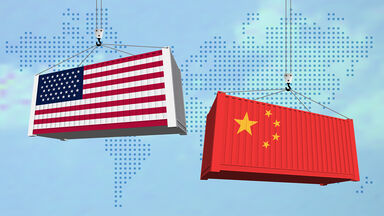 Before you can discuss trade embargoes, it’s important to clear up a bit of language first. When you hear of a trade embargo it’s typically alongside a sanction. However, the two terms are different.

Let’s look at how a trade embargo works and its effect.

How a Trade Embargo Works

Every country has goods or services it can’t make or grow on its own, making international trade extremely important. A trade embargo works by taking the ability to trade goods and services away from that country. When the ability to trade in a needed good or service is taken away from a country, it can have negative effects on its economy. For instance, it can create shortages and economic downturns.

A famous trade embargo example in history was between the U.S. and Japan. In the 1940s, the U.S. froze all Japanese imports and exports resulting in a huge trade loss. The embargo also included the hot commodity oil, which hit the Japanese economy hard at the time.

The U.S. has a famous and long-standing trade embargo against Cuba that began during the Cuban Missile Crisis. The embargo with Cuba is a full embargo, which includes the import and export of all goods and services. Over the years, the U.S. has lightened some of the trade restrictions on Cuba to allow consumer goods. However, under President Trump, the restrictions were tightened once again.

Iran is another country listed with a trade embargo in response to the Taliban and terrorism. While the U.S. has a total ban on all Iranian imports and weapons, the embargo falls under the category of a nearly total economic ban. However, like with most economic sanctions, there are still some areas for wiggle room.

What Are Examples of Embargo?

A typical embargo item used by countries is an oil embargo. For example, the U.S. needs oil for various reasons. However, the U.S. produces little oil of its own. Middle Eastern countries have an abundance of oil. If they choose to create a trade embargo with the U.S. for oil, then it could negatively affect the economy of the U.S. And this happened in 1973-74 when the Organization for Petroleum Exporting Countries (OPEC) imposed a trade embargo after the U.S. supported Israel during the Arab-Israeli War. This embargo led to a gas shortage and destabilized the U.S. economy.

Through its attempt to nuclearize itself, North Korea has been the recipient of several different embargoes and economic sanctions from multiple countries included in the United Nations (U.N.). While sanctions expand to many different types of goods and services like luxury goods, agricultural exports, and oil, it completely prohibits the trade of weapons with North Korea.

The history of Russia and the Soviet Union has been rocky. And throughout their history, several different economic sanctions have been imposed on them. Currently, Russia is the recipient of an embargo and other economic sanctions from the European Union. This includes a weapons embargo along with other military goods.

Trade embargoes are used as a political tool to stunt the economy or growth against countries that are getting out of hand. A trade embargo can have a negative effect on the economy of a country and make them more willing to negotiate. Learn more about government and politics by exploring different types of governments.