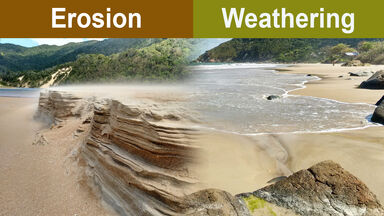 difference between erosion and weathering
Advertisement

In science weathering is defined as:

disintegration or alteration of rock in its natural or original position at or near the Earth’s surface through physical, chemical, and biological processes

Weathering is either started by or modified by factors such as wind, water, and climate. It is the breakdown of rocks into pieces or fragments.

In science erosion is defined as:

the process by which soil and rock particles are worn away and moved elsewhere by gravity, wind, water or ice

Soil and rock debris left behind by weathering are transported during the process of erosion.

Main Differences Between Weathering and Erosion

Weathering and erosion both involve rocks, but there are three main differences between these two processes.

Examples of Weathering and Erosion

Take a look at examples of weathering and examples of erosion side by side in a chart to see the slight differences between them.

Weathering vs. Erosion vs. Deposition

Processes like weathering, erosion, and deposition shape the natural world you live in. Explore nearby and famous landforms to see how these processes contributed to the look of those landforms today.