Examples of Vector and Scalar Quantity in Physics 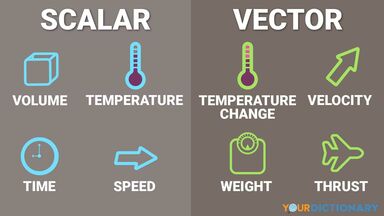 Understanding the difference between scalar and vector quantities is an important first step in physics. The main difference in their definitions is:

You can find a unit's density by dividing its mass by its volume. Because there are only two points needed in this calculation, it's a scalar quantity. Direction does not factor into an object's density.

How much ground have you covered? When measuring distance, you're finding the magnitude of space that you have traveled. It doesn't include displacement or speed; the scalar quantity of distance only discusses how much ground was covered.

Like other scalar quantities, energy is the product of two factors (force and displacement, in this case). It describes the magnitude of energy uses without measuring direction.

Many people use the words "weight" and "mass" interchangeably, but they're not the same thing. Mass is the amount of matter present in an object. It's not dependent on direction; the mass of an object is the same no matter what direction the object is moving.

It can be difficult to understand the difference between speed and velocity. However, knowing that speed is a scalar quantity might be helpful, as direction is not important when measuring speed.

When you take your temperature with a thermometer, you're measuring your average thermal energy. Since you already know that energy is a scalar quantity, you can probably figure out that temperature is also scalar.

Scalar quantities often refer to time, which includes the measurement of years, months, weeks, days, hours, minutes, seconds, and even milliseconds. There's no consideration or measurement of direction when measuring time, even though it appears that time is always moving forward.

Scalar quantity can refer to the volume of the medium, as in how much of the medium is present. Everything from tons to ounces to grams, milliliters and micrograms are all scalar quantities, as long as they are applied to the medium being measured and not the movement of the medium.

Work is the energy transferred to an object by force. It is a scalar quantity because it's the product of force and displacement. Work is not the same thing as force, which is a vector quantity, because work is the result of force.

While speed is a scalar quantity, acceleration is different. Acceleration measures the rate at which the velocity of an object changes. It factors in the period of time as well as direction, making it a vector quantity.

The scalar quantity of distance measures the ground covered by movement, but displacement measures how far it has moved from its original location. You can see that direction and magnitude very much matter when measuring displacement!

Force has both magnitude and direction. Unlike the scalar quantity of work, force causes an object to change its velocity. Think of forces like gravity when considering whether it is a vector quantity.

Momentum indicates that an object is in motion. It is the product of mass and velocity, and can only be calculated if you know how fast an object is moving (the magnitude) and in what direction.

It may seem like a fixed position has neither magnitude nor direction. And that's right — if you define "position" in that way. A position vector is taken relative to the origin of the coordinate system; that is, it exists at the end of a straight line that connects to the middle of an axis. The direction and magnitude are easy to see from that perspective.

Thrust is a type of reaction force that also has magnitude and direction. Think of being pushed or shoved through the air — you're definitely moving in a direction with magnitude! It's most commonly used in mechanics and aeronautics.

The weight of an object is the product of its mass and the gravitational acceleration acting upon it. Because it involves the force of gravity, weight has a direction (down) as well as magnitude.

Highly technical examples and explanations relating to scalar and vector quantities can be found on the National Aeronautics and Space website. It provides a complete description of scalars and vectors, along with examples and how they are used.

Physics All Around Us

So, now you have some examples of scalar and vector quantities and you understand some of the differences between them. For more physics review, check out these contact force examples that you're likely to see in the physical world. You can also delve more into the laws of physics with everyday examples of inertia.